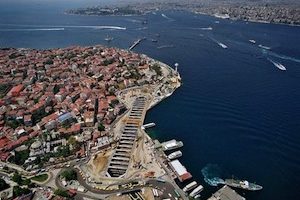 Turkey has seen a 24% rise in the export of vehicles between January and September this year compared with the same period in 2016, according to recent figures from the Turkish Automotive Manufacturers Association (OSD).

The country exported over 984,400 vehicles out of a total production figure of 1.2m during the first nine months of the year. Total exports for the year are forecast to reach 1.32m based on a final 2017 production figure that is up 18% to around 1.7m.

Passenger cars accounted for the majority of vehicle exports, according to the OSD, at nearly 690,000 units in the first nine months – a 38% increase on the same period last year. The market for exports is led by Oyak-Renault, Hyundai-Assan (both joint ventures) and Toyota.

The majority of Turkey’s exports go to the European Union, which is its biggest trading partner. Figures from the Uludağ Automotive Industry Exporters’ Association (OIB) cited in the Hurriyet Daily News show that in the first nine months of this year, around 78% of automotive exports worth $16 billion went to the EU, led by Germany, Italy and France. That figure was a 20% increase on the same period last year and further indication that the country is recovering quickly from a series of political and terrorist crises that hit investment and devalued the Turkish lira.

As Automotive Logistics reported earlier this year, passenger car and commercial vehicle production in Turkey is showing healthy signs of growth. Last year, the country made 1.5m vehicles and it has sufficient installed production capacity to produce nearly 2m. There has been almost $6 billion of investment in the automotive industry in Turkey over the last five years, according to the OSD, and foreign direct investment in the sector is important for the country as a whole.

Of added significance this year is that Turkey has doubled the value of its automotive exports to the US to $967 million – a year-on-year increase of 101% for the first nine months of 2017, according to the OIB report.