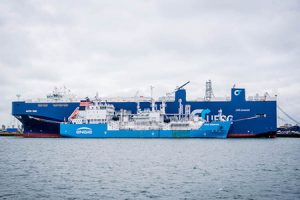 European ro-ro operator UECC has set up a weekly ship-to-ship bunkering service for its Auto Eco and Auto Energy vessels, which can run on liquefied natural gas (LNG) as well as heavy fuel. The vessels were fuelled at the Belgian port of Zeebrugge during loading operations.

The move follows the delivery of the bunkering vessel Engie Zeebrugge, reported to be the world’s first purpose-built LNG bunkering vessel, which arrived at the port of Zeebrugge at the beginning of April this year after delivery from Hanjin Heavy Industries and Construction in South Korea.

The Engie Zeebrugge, which has an LNG capacity of 5,000 cubic metres, is jointly owned by French natural gas distributor Engie alongside Mitsubishi Corporation, NYK Line and Fluxys – a Belgium-based company mainly acting as a natural gas transmission system operator. The companies signed an agreement to work together on the provision of an LNG bunkering vessel in 2014 and will operate the vessel under the commercial brand Gas4Sea, which was launched in September last year.

UECC started using its new dual-fuel LNG pure car and truck carriers (PCTCs) in March this year on its weekly Baltic Service. They are the world’s largest dual-fuel LNG car carriers and were ordered from Kawasaki Heavy Industries back in 2014.

The news is very significant for the automotive and commercial vehicle industry, which relies heavily on global ro-ro shipping to move finished vehicles to markets around the world. By the end of 2019, a global sulphur cap of 0.5% m/m (mass/mass) for marine fuel will be mandatory, compared with the current 3.50% maximum levels that have been in place since 2012.