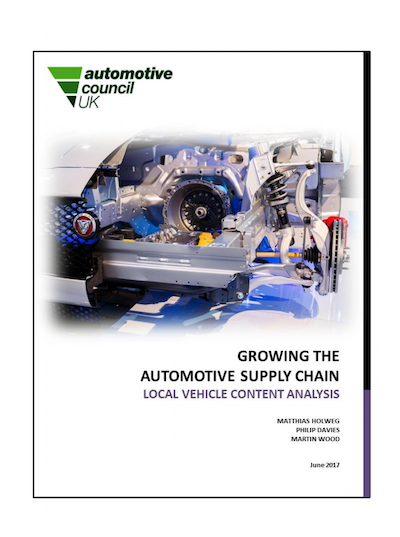 The percentage of local content in UK manufactured passenger cars continued to increase in 2016, but ‘anecdotal reports’ suggest the country has a way to go to reach levels achieved by other major European carmaking countries.

The latest Local Vehicle Content Analysis report from the Automotive Council, a joint UK government and industry organisation, shows that last year, 44% of all components (in value terms) used to make cars in the country came from local suppliers, up from 41% a year earlier and 36% in 2011.

The number is important as a healthy supply chain can be seen as a pre-requisite for OEMs making location production decisions, while beneficial trading terms in any bilateral trade deals post Brexit will likely need to meet certain rules of origin requirements.

“Operating on a ‘just-in-time’ delivery basis, sourcing from UK suppliers, reduces time and cost of supply chains, reducing the risk of delays which can halt production,” said the Council in a statement.

Mike Hawes, chief executive of the Society of Motor Manufacturers and Traders (SMMT) told delegates at the International Automotive Summit in London on Tuesday that the actual UK derived content of this local supply is probably far less than 44%, given the UK's integration with the European supply chain and that this growth in local content will need to continue.

“To take advantage of beneficial trading terms, for example zero tariffs, we will have to meet minimum rules of origin,” he said, referring to future trade agreements.

"Most trade deals require a 50-60% originated content threshold and that is a considerable increase of where we currently are, and not one that could be delivered in anything less than a decade."

He added it was therefore essential that content produced in the UK continues to be counted as European content and visa versa.

Ian Howells, senior vice president of Honda Europe, told delegates at the summit that remaining in the EU Customs Union may help the UK avoid any rules of origin shortfalls adding that "simple EEA [European Economic Area] membership or a free trade deal will not be sufficient for compliance with rules of origin".

Honda owns a manufacturing plant in Swindon in the UK and exports cars to markets around the world.

Looking for alternativesThe country’s exit from the European Union may just speed up the re-shoring of local suppliers, according to results of a recent survey from the Chartered Institute of Procurement & Supply (CIPS).

It showed that almost a third (32%) of UK supply chain managers across a number of sectors who work with suppliers on the Continent said they were actively looking for alternative suppliers based in the UK, in response to last June’s referendum.

In late February, Colin Lawther, Nissan Europe’s head of supply chain, called for government to do more to help grow the local supplier base for current UK car production, as well as for the expected rise of the electric and autonomous class of vehicles over the next decade and beyond.

“Nissan will not succeed in the future, with or without Brexit, unless the government does something to help our supply chain,” he said in response to questions from lawmakers.

The increased proportion of local content in 2016, as well as strong growth in overall vehicle manufacturing volumes, up 38% since 2011, means domestic suppliers to the automotive industry have increased their output by 60% in five years, according to the Council.

“Exhausts, large pressings, small pressings and plastics have all enjoyed growth, though opportunities to increase production capacity in these commodities, and others, remain,” said the Council in a statement.

Imports will continueThe report’s authors said there were no reliable sources available to compare the UK’s local vehicle content to its peer group, but that “anecdotal reports suggest that countries such as Germany and France achieved up to 60% local content”. It added that “this is likely to be the highest level of local content that is realistically achievable” given the global dispersion of the supplier base, meaning invariably a considerable amount of parts have to be imported.

The report added: “From a UK perspective, given the ownership structure of the tier-1 supply base, 50% local content by value is regarded as a more plausible target for the overall UK car industry.”

Reaching that target will still take time and according to Hawes, the ongoing effort to do so is not a substitute for the UK's current trade arrangements.

He called on the government to seek an interim deal that would see the UK remain in the customs union and the single market for the duration of the Brexit negotiations, which started this week (June 19th), and for as long as it took to settle a new deal with the EU.

There was a degree of pessimism regarding the strength of the existing UK supplier base and its potential for growth at the recent Automotive Logistics Europe Conference in Bonn, Germany. Christoph Stürmer, global lead analyst at PWC Autofacts, highlighted the lack of a supplier base in the UK, describing the country as “more of a near shore final assembly operation, than a deep, grounded, automotive industry location”.

“I have been looking around. I have really made an effort to try to find a major supplier that has a major operation in the UK and I haven’t found it,” said Stürmer, adding that that while he had come across a number of just-in-time, just-in-sequence assembly shops near to the major car plants supplying parts such as seats and bumpers, he couldn’t see “any real heavyweight tier two suppliers in the UK”.

“That puts the UK, despite its glorious history, much more in the area of, say, Turkey or Morocco as a competitive location, rather than Germany, France or Italy with their deep-rooted automotive industry,” he said.

The Automotive Council says the collaboration with government, supported by the Automotive Investment Organisation in the Department for International Trade has helped “put the industry back on the global automotive map”.

An example of a more recent investment highlighted in the report is the plant by Magna Cosma International announced in May 2016. Opening in November this year, the aluminium casting facility in Telford, Shropshire is the first significant investment in the UK’s aluminium foundry capacity in 20 years and will supply Jaguar Land Rover in the country.

“This investment by Magna into a new state-of-the-art, high-pressure aluminium casting facility highlights the importance of localising manufacturing where it makes most sense to Magna and its customers,” said Ben Goater, general manager of Magna International (UK).