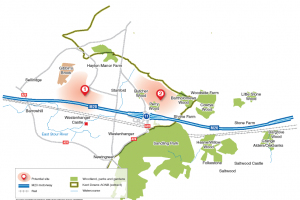 The UK government’s Department for Transport (DfT) has given the go-ahead for a truck park to be built near Stanford in Kent, on the M20 motorway, that will be capable of holding 3,600 trucks.

The park will be used to ease congestion and other issues on the motorway as part of Operation Stack, the emergency procedure initiated by the port of Dover and Kent Police that uses parts of the M20 to queue trucks travelling towards the continent to avoid causing gridlock across Kent's roads.

Operation Stack was used 32 times last year because of disruption caused by industrial action by the Syndicat Maritime Nord union and attempts by refugees and migrants to gain illegal entry to the UK from Calais via the Channel Tunnel.

Following this, the government said in its Autumn Statement last year that it would be providing up to £250m ($324m) for a permanent truck area. The DfT said spaces would be available from summer 2017.

“The new lorry area by the M20 will deliver better journeys for drivers and will not only support the region’s economy but also businesses as far away as Scotland that rely on the M20 to access the Port of Dover and the Channel Tunnel,” said Patrick McLoughlin, secretary of state for transport. “We have committed up to £250m for the lorry area and we are now making it a reality.”

New entry and exit slip roads will be built on the eastbound carriageway, providing direct access to the lorry park. Balfour Beatty has already been appointed as the lead contractor for the project.

According to the DfT, more than 1,000 drivers, residents and workers attended eight public events during the consultation on the truck park and nearly 1,300 people provided written responses to the proposals. The DfT said in statement that nearly twice as many people thought it should be located at Stanford West (location 1 in the image above) as thought it should be at an alternative site to the north of junction 11 (location 2), because, among other reasons, the latter would have been close to an area of outstanding natural beauty.

The next stage of the project will involve consulting on the details and the environmental impact of the scheme. That consultation will open shortly.