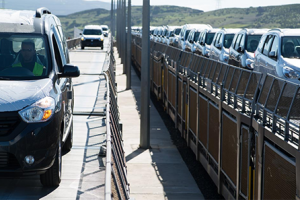 The UK government’s Department for Transport (DfT) has outlined a new rail freight strategy aiming in part to target the long-term growth potential of industry sectors that are currently underdeveloped and subject to network constraints – including automotive.

The DfT’s rail freight strategy is part of an overall government commitment to ensure transport plays a full part in delivering the emissions reductions needed to meet its legally binding Fifth Carbon Budget. That requires a 57% reduction in emissions by 2032 compared to 1990 levels. The target is part of a longer term plan to reduce emissions by 80% by 2050 as set out in the Climate Change Act.

The new strategy is based on a study of the potential for rail freight growth by independent engineering and planning consultancy Arup. This assessed the potential to reduce carbon emissions through a greater modal shift from road to rail and highlighted the opportunity for the rail freight industry to establish new ‘core’ markets in the wake of a decline in the movement of coal to power stations.

Along with domestic intermodal container movements, construction and biomass, the study identified long-term rail freight growth potential for the automotive industry, both in terms of finished vehicle moves and inbound parts movements.

The DfT has suggested that while automotive is currently a small sector for rail freight, opportunities exist for new flows, including in both directions through the Channel Tunnel for both cars and parts. The growth of traffic through the Channel Tunnel is limited in the short term, it admitted, due to security issues in Calais related to the migrant crisis, which are seen as a barrier to growth. However, the potential the Channel Tunnel has as a rail link for the automotive industry is clear and was shown most recently in STVA’s use of it for vehicle shipments between Bristol and Ghent, it said. Since July, GB Railfreight has been working with STVA to provide a weekly service that uses nine specialist double-deck wagons each able to carry 24 cars. Fréthun rail station, B Logistics and Europorte France work together on the route from Calais to Ghent. Parts from European suppliers inbound to the UK are already transported by rail through the Channel Tunnel.

Port connectionsThe DfT has also highlighted significant potential for growth in automotive shipments by rail to and from key entry ports into the UK.

Arup’s study pointed out that UK car production was now at an all-time high and that there were currently 10 pairs of trains carrying finished cars and vans on most weekdays across the country, with much of that transport dedicated to maritime exports.

In 2015, the UK exported more than 75% of the vehicles it made – the equalivalent of 150,000 a month, according to figures from the Society for Motor Manufacturers and Traders (SMMT). Arup’s report said much of this export traffic went ‘over the quay’ close to the assembly plants of carmakers. Renault Nissan, for instance, has made the port of Tyne its common entry point for imports to the UK and also uses Sunderland port for exports. Meanwhile, Jaguar Land Rover uses the port of Liverpool, which has received substantial investment from Peel Ports to build on its automotive services, increasing the viability of a rail link.

However, there are a number of constraints to greater adoption of rail for automotive freight movements that need to be overcome, said the report. These include the availability of freight train paths, the limited supply of specialist wagons and restrictions on loading gauge, which limits the movement of larger SUV-type vehicles.

The Arup study noted that more recently established UK assembly plants, including those of the Japanese carmakers, were often at a distance from linking rail lines. Consequently, most domestic finished vehicle movements in the UK were by made by road to the dealerships. Arup suggested rail was unlikely to be competitive for these deliveries, but said there was interest in moving more of the UK’s vehicle export volumes to the ports or Channel Tunnel by rail and some potential for imported volumes on backloads to inland distribution terminals.

Investment in wagonsIn terms of the limited availability of specialist rail wagons, Arup noted that the industry was reluctant to invest in those with the required gauge for the UK as they were seen as a limited asset, compared to those able to move into other European markets.

“The industry is reluctant to invest in specific gauge-limited specialist wagons that can only serve the UK market,” said the study, adding that there was a limited number of specialist rail vehicles available that were suitable for this trade. This constraint is being compounded by the trend towards larger SUV-type vehicles, fewer of which can be loaded on rail vehicles because of the gauge restrictions, making movements by rail less competitive.

However, the report went on to acknowledge that a significant number of wagons suitable for use in the UK were currently in use on flows in Europe. Their use was determined by the transport and logistics companies that owned or managed them and subject to distribution contracts, it said.

Those contracts also influenced the use of short-sea shipping for importing vehicles from Europe, it added. While road remains the dominant mode of transport in and out of the ports, the Arup study identified scope for growth in the market share rail had on routes via key entry ports, including Southampton, the leading port for vehicle handling in the UK, as well as Portbury and Sheerness. These ports handle more imports of vehicles than exports.

The study also identified assembly plants in the UK that are already, or could be, connected to the rail network. These included BWW’s Mini plant near Oxford, Jaguar Land Rover’s plant in Halewood and Honda’s plant in Swindon (connecting via South Marston). There was also potential for Toyota’s plant in Burnaston, according to the study, and for Nissan in Sunderland, which is close to the former Leamside line. Arup also added that, while connecting Jaguar Land Rover’s plant at Solihull would require long-term planning and the identification of a suitable railhead connection, the volume of vehicle movements to Southampton was substantial.

Looking at inbound parts movements from Europe, Arup found that the automotive industry tended to use 4 metre high road trailers because this is the legal height limit for semi-trailers in mainland Europe. By contrast, Ford’s plant at Dagenham is already served by two pairs of dedicated component trains which could be transporting more into the plant, said Arup, though this would require gauge clearance for components such as body pressings.

In conclusion, the Arup study said that while the growth in rail freight for the automotive sector may be slow, more flows could convert thanks to an increase in demand for the service. This compared favourably to other sectors, such as oil, chemicals and industrial minerals, which were more likely to remain static or even decline in their uptake of rail in future.