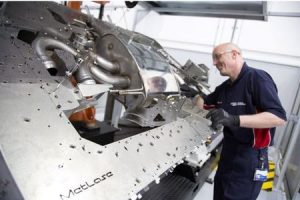 UK parts manufacturer and logistics provider, Unipart Group, has used the announcement of its annual financial results to highlight a number of investments in digital technology covering inventory control, distribution and sequencing management.

Last year the company's turnover was up 3.5% to £747.7m ($934m), up on £722.5m in 2015, and it ended 2016 with a net cash balance of £15.2m (more than double the £7.1m in the previous year). While Unipart said it was not releasing a figure on the overall investment in digital technology over that period because it was “spread across multiple business units”, a spokesperson did say that, in terms of investment scale, it was “in the millions”.

Rapid advances in digital technology are driving changes in the logistics processes that support the global automotive industry, both inbound and outbound, from increases in automation to supply chain management and market forecasting. However, as revealed at the last Automotive Logistics Global conference in Detroit, the concern is whether manufacturers and logistics providers are investing enough attention and capital in keeping up with the digital transformation of the industry.

That was a concern shared by Unipart chairman and group chief executive John Neill. Last week he said that one of the greatest challenges that companies faced today was “the disruptive and dislocating pace of change that would come from the integration of intelligent technologies” and that continued investment in innovative developments was a priority; that included in the automotive sector.

"The speed of current breakthroughs has no historical precedent,” said Neill. “For the first time in history, technology is changing faster than the human ability to adapt to it. We are devoting significant resources to equip our organisation to be among the leaders in our sector at embracing and deploying these technologies.”

Systems support for automotiveNeill outlined some of the digital investments the company had been making over the last year, including in its Unipart Business System, which manages control of global inventory, including supply chain and materials management, forecasting, integration with dealers, warehouses and distribution centres, and financial systems management.

Again, the company would not reveal a total investment figure in the system or the customers it served, saying only that it worked with a range of customers, including “a luxury global automotive client”.

The company has also launched a digital enterprise management system that has provided another unnamed luxury automotive manufacturer with sequencing and distribution centre management for inbound supply.

“This system provides a production logistics solution for a premium automotive manufacturer and manages the flow from the supply base into the warehouse and onward to the line side,” said a spokesperson for Unipart.

Neill said Unipart is also extending the provision of its retailer inventory management system to Jaguar Land Rover. The automated system manages parts stock levels at the retailer or dealer and has been deployed at a number of outlets. It is now being rolled out across the majority of the global network, according to Unipart.

The company was also keen to flag up a upcoming distribution hub for McLaren Automotive in North America that would provide faster aftermarket distribution to the North America retailer network when it launches. Until that launch the investment in and location of the hub also remains confidential.

As reported first in August last year, Unipart has also signed a seven-year contract to supply engine components for Ford cars being produced in China. The components maker will supply the operation from its Unipart Powertrain Applications site in Coventry, UK, with fuel rails – part of the common rail fuel injection system used to feed fuel into the engine under high pressure. Supply will begin in 2018 and will mean a 50% increase in production at the Coventry site and the addition of 40 jobs.

Finally, the company is continuing in its joint venture with Rolls-Royce called MetLase, which was set up in 2015 and covers the automotive, motorsport, aerospace and medical markets. The company is focused on patented tooling to solve engineering issues. Unipart said that this included "smart enabled tooling" which demonstrated its “Industry 4.0 capability to speed processes, reduce cycle time and provide predictive maintenance facilities”.