Update: Gefco Group to use Mexico as global automotive hub 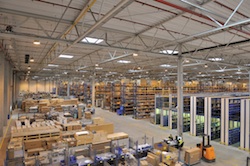 The Gefco group has announced plans to expand its Mexican operations, including taking over an international platform that will supply automotive parts to the Latin American region. The logistics provider has suggested that it would use Mexico as a global sourcing hub for the import and export of parts for manufacturers and automotive suppliers. Gefco claimed that 95% of its business in Mexico will be automotive.

Following the opening of its Mexican subsidiary in Mexico City in March this year, the company is currently negotiating a project to incorporate a pre-existing logistics platform in nearby Toluca, near Mexico City.

According to Gefco, the platform already carries out global sourcing of parts for PSA factories in Brazil and Argentina. Similarly, it will manage flows from PSA suppliers located in Mexico who send parts to PSA plants in Mercosur, Europe and Russia. However, Gefco also plans to work with carmakers and suppliers outside the PSA group: specific examples include Man – for whom the company operate CKD flows between Brazil and Mexico – Delphi and Vitro.

It was not entirely clear from whom Gefco will assume the Toluca operations. However, in a statement Gefco said that the platform would complete a network of international hubs that support global parts flow, including those currently in Shanghai, China; Trnava, Slovakia; and Le Havre and Mulhouse-Sausheim in France.

Gilles Cudia, general manager for Gefco Mexico, also said that the expansion would enhance Gefco’s presence in Latin America, where it already has operations running in Argentina, Brazil and Chili.

“Mexico is a hotspot of activity in general and for the automotive sector in particular,” said Cudia. Describing Argentina, Brazil and Chile as a newly formed “Latin American network”, he said the subsidiary would “provide industrial customers with integrated, door-to-door logistics solutions”.

One of the company’s key aims is to consolidate Mexico’s position as an industrial and automotive hub. The company pointed to Mexico’s accessibility – with its extended ocean borders and easy port access – as having strategic potential for import and export flows.

The company told Automotive Logistics that the logistics centre will manage flows from PSA suppliers located in Mexico that are sending parts to PSA plants in Latin America, Europe and Russia. After collecting the parts at supplier premises in Mexico, they will bring them through the warehouse where the parts will be consolidated in containers to be sent to PSA plants.

It is not yet clear whether Gefco Mexico will also target services in other segments of the automotive industry in the country, such as outbound logistics and vehicle exports. However, the company said that the Mexican subsidiary has already won a number of overseas contracts, including those with automotive suppliers, carmakers and other industry. Gefco said that potential routes from China and Europe with suppliers are also under discussion with leading suppliers.

The move is the latest development in Gefco’s steady expansion of its international network, which now manages 36 subsidiaries and 70 partners. In recent years it has opened subsidiaries in Bulgaria, Kazakhstan and South Africa. The group also extended into the Middle East through its Dubai branch in late 2012.

The company, which is now majority-owned by Russian Railways (RZD), has experienced growth outside of its largest markets in Western Europe, most of which are still suffering sales and production declines this year. PSA, which still owns a 25% share in Gefco, has seen sales decline 13.3% in the first six months of this year in Europe.

While Gefco recently reported an overall decline in revenue for 2012 (read more here), encouraging progress has been noted in Latin America, along with the Russian and Chinese markets.