US carmakers need production discipline to avoid another crisis 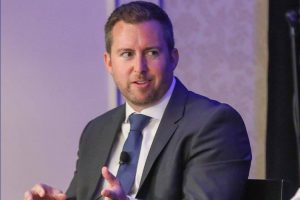 US carmakers need to keep production levels in check if another crisis is to be avoided, delegates at this week’s Finished Vehicle Logistics Import Export summit in Baltimore were told.

With the US new vehicle market headed towards its first decline since 2009 this year, there are worrying signs of an industry headed back to the ‘bad old days’, with vehicle inventory and dealer incentives creeping back towards highs not seen since before the financial crisis.

Brandon Mason (pictured), automotive director and mobility leader at the analyst firm PwC, told the summit on Wednesday that vehicle inventory levels now exceeded 4m units – the highest since 2005 – with an average 70-day supply across carmakers. That is 10 days’ more inventory than is considered healthy, he warned, and comes despite OEMs reducing shifts and idling plants for a number of weeks in an effort to balance inventories.

“If inventory continues to hover at that level, that days-of-supply number is going to continue to creep up and that is not a good sign,” Mason commented.

Dealer incentives are also up. While average transaction prices for vehicles in the US have risen to a high of $35,000, incentives are now above 10% of average prices. For passenger cars, which account for 38% of the market compared to 62% for trucks and SUVs, incentives are even higher.

“Passenger car incentives are around $3,800 a vehicle and those are relatively low-margin vehicles to begin with, so that is definitely of concern,” said Mason.

A record number of leases are going to be coming off consumers’ hands in the next two years, which will flood the vehicle market with relatively new used vehicles at lower prices – something that will further drive consumers away from the new car market, warned Mason.

PwC predicts light vehicle sales in the US will fall to 16.8m units this year, down from a record 17.5m in 2016, and will probably remain in that range for several years. However, any sales volume above 16m is still enough to keep the US industry highly profitable, said Mason, though he warned that the industry’s health would be eroded if carmakers couldn’t avoid overproduction.

Following the financial crisis that erupted in 2007-2008, it took carmakers a long-time to adjust output, he stressed, and many ended up with a tremendous amount of unsold inventory – so much so that many plants across the US were shuttered or idled for months during 2009.

“If we looked at these same charts 10 years ago as we were heading into the last recession, we would have seen the same red flags,” Mason said. “So the question is, how disciplined is the industry willing to get? What cuts are they willing to make for these vehicles and incentives to really right-size this? They did not do it last time and we saw what happened. The hope is that they will try and keep these things in check this time around.”

While speakers and delegates did concede that high inventory levels were clogging ports and yards, OEMs at the conference suggested that they had learned lessons from the last crisis.

Chuck Kendig, assistant vice-president of sales and production planning and logistics at American Honda, said the company was keeping a sharp eye on incentives and had already slowed production on some products.

Alrick Duncan, intercontinental and port operations supervisor at General Motors, said that in the past two years, the carmaker had changed its supply chain organisation in ways that promoted better communication when dealing with a range of issues including vehicle supply and bottlenecks.

And Mark Boucher, director of vehicle logistics at Volkswagen Group of America, said his company was working hard to balance its model mix for the US market – though he admitted that looking into the crystal ball on market forecasts was not an enviable job.

Mason said the industry would remain healthy over the medium term, with US and Mexican production both predicted to rise further. He suggested North American production would rise from 17.6m units in 2016 to 19.1m by 2023, with the US and Mexico each rising by around 1m units and Canada declining by about 500,000 units.

This production growth would service some regional sales increases and increased exports from US and Mexican plants, he said. However, much of it would probably substitute imports to the US from outside North America, he continued, notably from Japan and South Korea as carmakers from those countries open or expand regional plants.