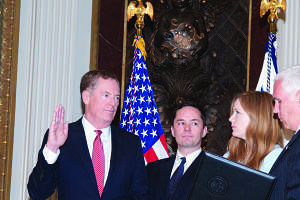 During his election campaign last year, Trump took aim at the country’s multilateral trade deals, including Nafta and the Trans Pacific Partnership, saying he would renegotiate or cancel them once in power. In January, he officially withdrew from the TPP.

Lighthizer’s letter kick-starts a 90-day consultation period between the administration, Congress and business. That means the earliest negotiations would be able to start is about mid-August.

“We note that Nafta was negotiated 25 years ago and, while our economy and business have changed considerably over that period, Nafta has not,” stated the letter. “Many chapters are outdated and do not reflect modern standards. For example, digital trade was in its infancy when Nafta was enacted.”

The USTR is a cabinet-level agency, principally responsible for negotiating reciprocal trade agreements between the US and foreign countries, including the inter-agency work that is involved in developing trade agreements like Nafta.

Under a law established in 2015 as part of Congress’s periodic renewal of the TPA, the president must give Congress a window of 90 days to allow the legislative and executive branches to discuss impacts.

Since February, when Trump invited congressional leaders to begin discussions, initial consultations have been had with several government committees and advisory groups.

“USTR will now continue consultations with Congress and American stakeholders to create an agreement that advances the interests of America’s workers, farmers, ranchers, and businesses,” read a statement from the office of the US Trade Representative.

Once the countries have concluded negotiations and the deal is complete, the US House and Senate get the final say with a straight up-or-down vote.

[related_topics align="right" border="yes"]In a statement commenting on the release of Lighthizer’s letter, Ross said: “Since the signing of Nafta, we have seen our manufacturing industry decimated, factories shuttered, and countless workers left jobless. President Trump is going to change that.

“I look forward to working with the President, Ambassador Lighthizer and our counterparts from Mexico and Canada to find a solution that is both fair and beneficial for all parties.”

A change or end to Nafta would be likely to have wide-ranging impacts on the North American and global automotive supply chain and thus logistics networks. However, some experts suggest the result wouldn’t necessarily lead to large increases in US production.

A report on the potential consequences released in January by the US-based Center for Automotive Research (CAR) concluded that any move to withdraw from the agreement or otherwise restrict automotive vehicle, parts and components trade within North America would result in a less competitive US automotive and supplier industry.

“Counter to the incoming Trump administration’s goal of creating manufacturing jobs, the withdrawal from Nafta or the implementation of punitive tariffs could result in the loss of at least 31,000 US automotive and parts jobs,” said the CAR report.