US vehicle ports hit by Hermine 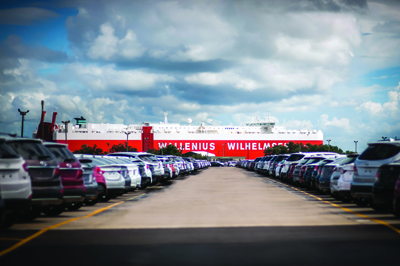 Vehicle terminals in the US states of Florida and Georgia shut down operations last week as Tropical Storm Hermine raged through the region.

The Georgia Ports Authority took the precaution of shutting its facilities at Brunswick and Savannah ports on Thursday night (September 1st). The closures included Garden City Terminal and Ocean Terminal in Savannah, and the Colonel’s Island Bulk Facility and Mayor’s Point Terminal in Brunswick.

“Out of an abundance of caution, and for the safety of our employees, local residents, customers and service providers, we are closing our facilities until the storm has passed,” said GPA executive director Griff Lynch at the time. “The GPA would like to thank our port users, stakeholders and employees for their continued support.”

The storm hit the Florida Gulf Coast early on Friday (September 2nd) as a category one hurricane, the first hurricane to hit the state of Florida in 11 years. After moving inland and toward Georgia, however, it was downgraded to a tropical storm, though the impact was more severe in Georgia.

The port of Jacksonville (Jaxport) in Florida largely escaped the full impact of Hermine as it passed the northwest side of the port according to Steve Taylor, CEO of vehicle terminal operator Amports, which has facilities there and at Brunswick.

Good communication between Jaxport and public safety and operations teams, and the ports tenants also meant that the port was well prepared to deal with the impact it did get according to Nancy Rubin, spokesperson for Jaxport.

“Everyone did their part to minimise the possibilities of damage by assessing individual lease hold needs and carrying out the necessary clean-up or securing of the yards,” said Rubin.

Jaxport stopped operations at 10:00pm on Thursday and started again at noon the next day. There were no reports of damage despite severe wind conditions overnight according to Rubin.

Taylor said that Amports enacted its emergency operations plan at Jaxport, which included the movement of vehicles to low lying areas over storm drains and the removal of any material, such as signs and pallets, that were in danger of becoming flying debris. All gates and doors were also secured. As with Brunswick, the coast guard directed vessel arrivals and departures at the port.

Georgia, meanwhile declared a state of emergency on Thursday for 56 counties, including Glynn and Chatham counties, where Georgia’s deepwater ports are located. Brunswick shut down operations at the same time as Jaxport but did not open them again until sometime on Saturday (3rd).

“The South Georgia area received heavier winds and rains therefore we will get into the port of Brunswick as soon as possible to assess any damage,” said Taylor.