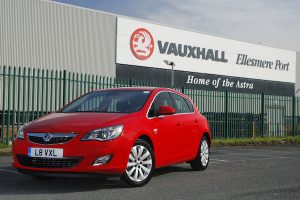 Vauxhall Motors has announced it is making a further 250 redundancies at its Ellesmere Port plant in the UK, following a meeting it held on January 4th with union Unite.

The latest announcement comes on top of the 400 redundancies announced in October last year, at which point the carmaker also revealed plans to move Astra production at Ellesmere Port to one shift from two during 2018. It said a challenging passenger car market in Europe meant it needed to adjust production volumes to meet demand and protect its future, and that the move to a single shift would not mean a big change to the number of Astra cars made at the plant.

“Current manufacturing costs at Ellesmere Port are significantly higher than those of the benchmark plants of the PSA Group in France,” said the carmaker in statement last October. “The teams are conscious of the need to accelerate the recovery of plant productivity in order to meet the challenges ahead, while continuously improving the already high level of quality achieved today.”

Overall production figures for Ellesmere Port in 2017 will not be available until the end of January but a spokesperson for Vauxhall said pan-European market decline had hit the company more in the second half of the year. In 2016, the plant made just over 118,000 vehicles.

The company said Ellesmere Port would move to a single shift operation in April with the additional reduction in staff taking place between April and September this year.

Vauxhall was bought, along with Opel, by PSA Group last year when GM sold its European division for €2.2 billion ($2.3 billion). However, a spokesperson for Vauxhall told Automotive Logistics the move at Ellesmere Port was an internal Vauxhall decision and not instigated by PSA Group.

The carmaker has been slowing down production over recent months and, according to the spokesperson, is getting to a critical point where efficiencies demand that it moves to a single shift. However, he said, this would not mean a big step change in production.

“[W]e will build almost as many cars but much more efficiently and probably at a greater line speed,” he commented. Details of the efficiency gains have not yet been revealed, however.

The company said it was committed to consulting with employee representatives to look for “potential opportunities to minimise the impact of these proposed headcount reductions”. That consultation will take place over a 45-day period, in line with legal requirements.

Vauxhall also has a plant at Luton in the UK, which makes the Vivaro van, but has not made any announcements relating to that.

[related_topics align="right" border="yes"]Last year, PSA said it was targeting €1.7 billion of annual synergies within 10 years from combining supply chains. It said it could return Opel to profit for the first time this century by 2020. PSA expects much of this saving to come from synergies in manufacturing, purchasing, the supply chain and R&D.