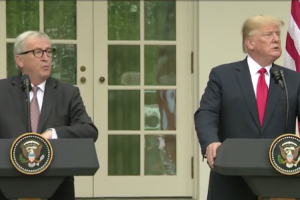 Carmakers are faced with shifting production, higher purchase costs, lower profits and the possibility of raising the price of their products as a consequence of the continuing global trade conflict.

Volvo Cars of Sweden is shifting production of its XC60 SUV for the US market from China to Europe to avoid Washington’s latest duties on Chinese imports, said CEO Hakan Samuelsson, adding the company would continue production in China for other markets. Cars are included in Washington’s $34 billion (€29 billion) package of tariffs.

Li Shufu, chairman of the company’s owner Geely of China, has warned tariffs would bring about price increases and may ultimately force the company to further diversify its production in the US, China and Europe.

The shifts are happening just as Volvo is preparing for a fourth-quarter production start on the S60 mid-size sports sedan at its first plant in the US. The company held an opening ceremony for the $1.1 billion factory near Charleston, South Carolina, in June.

US motorcycle manufacturers Harley-Davidson and Polaris have said they will move production abroad to avoid retaliatory tariffs on US-made goods from other countries.

Supply and demandThe trade wars were sparked off by US President Donald Trump imposing import duties of 25% on steel and 10% on aluminium in March, on the grounds of national security. Outcomes included higher prices for the metals, which make up at least two-thirds of the weight of cars.

US-based car makers did not escape the increased input costs, even if they buy mainly US-made steel and aluminium, because fewer imports led to reduced supply, causing prices to rise: the basic workings of the economic law of supply and demand.

GM’s profit fell 2.8% year-on-year to $2.4 billion, mainly because steel and aluminium cost more, and the company has lowered its per-share earnings expectations to around $6.00 from a previous range of $6.30 to $6.60.

“The unexpected or accelerating pressure is really on the steel side of the business,” said chief financial officer Chuck Stevens, who predicted the more expensive metals could add as much as $700m to the company’s production costs this year.

FCA adjusted its 2018 outlook downward to a projected turnover between $134 billion and $137 billion from the previous $146 billion. The company said it was feeling pain from duty changes in China which had resulted in fewer sales of its luxury Maserati brand.

Caterpillar, which manufactures mining and construction equipment among other products, said it anticipated the tariffs would add $100m to $200m to its costs in the second half.

Meanwhile, Japan’s Nissan Motor, which has two plants in the US, said higher steel and aluminium prices accounted for more than half of the 44 billion yen ($394m) year-on-year decrease in operating profit for the three months to June. Net profit fell 14% to 115.8 billion yen.

The company is expecting net income to decline by a third in its financial year to March, but may revise the forecast if steel and aluminium prices continue to climb. “We believe the commodity price hike may be more than initial expectations,” said Joji Tagawa, head of investor relations.

Daimler, the German group which includes Mercedes-Benz, reported Q2 net profit of €1.82 billion ($2.13 billion), down 27.3% on the corresponding period in 2017, partly because of the tariffs.

While it is tempting to think the higher costs can be passed on to car buyers, the highly competitive nature of the industry limits the extent to which that option can be applied: raise the price and the usual result is reduced sales and lost market share. However, Daimler and German compatriot BMW are reported to have raised some sales prices.

Caterpillar, which sells to companies not wage-earning consumers, is in a more privileged position and said it intends to largely offset the higher metal costs through price increases.

Winnebago Industries, a recreational vehicle manufacturer in the US, is employing another method to combat the more expensive metal: modifying vehicle floor plans to trim costs. But Michael Happe, CEO of the Minnesota company, sounded a note of caution: “Uncertainty is never a great thing for the economy and the more noise there is there’s a risk that consumers will press pause, the Dow Jones news wire service quoted him as saying.

Renewed talksThere is a hint that President Trump is turning down the volume. He and European Commission president Jean-Claude Juncker agreed in White House talks last week to work towards negotiating a reduction in tariffs on non-automotive industrial goods and seek to resolve the steel and aluminium tariffs issue.

President Trump also pledged not to impose threatened tariffs on European-made cars as long as those discussions continue. However, Washington’s Commerce Department has been instructed to continue an investigation into possible levies on auto parts and finished vehicles.

Should they be imposed, GM has warned other countries will retaliate with their own measures and that could lead to higher prices and job losses in the US. When asked about that possibility in a conference call after the company announced its Q2 results, CEO Mary Barra, said: “I would just, again, focus on the fact that I think it’s in everyone’s best interest to have a strong United States auto industry. It’s a big provider of quality jobs.”

Meanwhile, in the past week a steel executive has given an insight into what the 25% tariffs mean for US steel producers. Tim Timken, who heads TimkenSteel, said: “The US government has put the world on notice that it will defend our steel industry in the interest of national security and that unfair trade won’t be tolerated. That too is helping to restore fair pricing [for steel].”

Among the products the Ohio company manufactures is special bar quality (SBQ) steel used in power trains and other heavy-duty applications in vehicle manufacture.