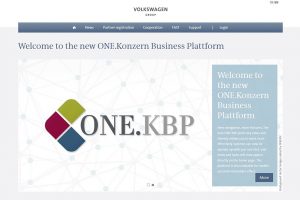 Volkswagen’s ONE online procurement platform has officially gone live, linking 300,000 users from both the company and its suppliers.

The company says many of the new features of the platform were developed in close cooperation with suppliers during several supplier interaction days, as part of the FAST initiative, which involves working with partners to implement technological innovations.

“For the redesign of our digital procurement platform, feedback from our users, the suppliers and related operational divisions, such as finance, production, logistics, quality assurance and technical development, was especially important. This way, we were able to orient the system specifically to users' needs,” said Thomas Eckardt, head of process management supply chain at VW Group Procurement.

New functions include the new rapid access to applications, improved alerting and mobile phone capabilities, all making it more user-friendly and improving its efficiency, according to VW.

Suppliers were also involved in the test phase of ONE with 400 users testing the platform since December 2016.

Discovery platformLast month, the carmaker also launched the DISCOVERY platform in partnership with EURO-LOG for use by its 5,000 suppliers and logistics providers in Europe.

The company says the new interface will make cooperation between suppliers and forwarders more efficient, automating the transport registration between these parties.

Prior to this, each provider operated its own system, often with manual processes, according to VW.

“With DISCOVERY, a joint communications platform for the Volkswagen Group is now being launched for the first time. Master data and transmission errors between individual process partners will be greatly reduced in the future,” the OEM said.

VW expects all its European suppliers to be using the communication platform by the beginning of 2018.