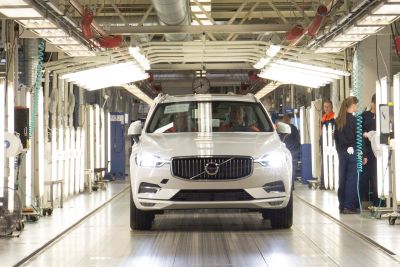 Following its decision to shift production of its XC60 back to Europe from China, Volvo Cars has revealed it sought exemption from US tariffs of 25% on imports of its SUV, which were exclusively made in China and exported to the US.

So far this year the carmaker, which is owned by Chinese company Geely, has sold around 21,400 XC60s in the US, which account for a third of its sales there. Last month it sold 2,839 units with an overall sales figure in the US of 8,970.

Production of the XC60 started in Chengdu in 2013. The vehicle was also made at the OEM's plant in Torslanda, Sweden, until March. Production will resume in Torslanda before the end of the year.

The Trump administration is imposing tariffs on a range of goods from China, including finished vehicles, as part of a trade war that has escalated this year. Duties on Chinese goods worth $34 billion were imposed in July and this week the US government listed another $200 billion worth that would be subject to tariffs. Those goods will be levied at 10% for the rest of the year and the charge will increase to 25% from January 1 2019.

In a letter to the the US Trade Representative's Office, Volvo said the imposition of the additional 25% duty on mid-size SUVs would cause “severe economic harm” and would be borne by American consumers.

In August, Volvo CEO Hakan Samuelsson said the carmaker would shift production of the XC60 to Europe for US export if the tariff was applied to its vehicle imports.

In June this year, Volvo opened its first US plant in Charleston, South Carolina, and is making the Volvo S60 premium mid-size sports sedan. From 2021, the factory will also build the next generation of the Volvo XC90 large premium SUV. Cars built at the plant are destined both for the domestic US market and international export.

Rival carmaker Ford recently announced it had made a decision to cancel planned imports of its Focus Active model to the US from China because of “the negative financial impact” the tariffs would have on sales. Imports of that model would have started next year.

The impact of US trade policy and the imposition of tariffs on the automotive industry is under discussion at this week's Automotive Logistics Global conference in Detroit.