VW adds Jaxport to its US ports of entry 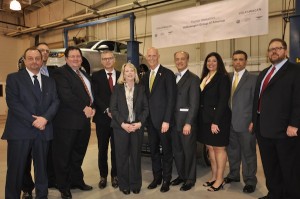 Volkswagen Group of America (VWoA) has announced that it will begin using the port of Jacksonville (Jaxport) in Florida in May this year as its main port of entry for the delivery of vehicles to the south-eastern region of the US.

Under an initial five-year contract the carmaker said it will move 100,000 VW, Audi and Bentley units through the port in the first year, with plans for 550,000 in the next five years. Deliveries will begin in May this year and port processor Amports will be handling the vehicles at its facilities at Jaxport. The move marks a shift from the port of Brunswick.

The carmaker also uses the ports of Davisville, Houston and San Diego.

Vehicles arriving into Jaxport from plants in Europe and Mexico will be distributed within Florida, Georgia, South Carolina, North Carolina, Alabama, and Mississippi.  VWoA has 118 dealers in the southeast region and the company is working with four road haulers for the distribution of the vehicles from Jaxport to those dealers: Crown Auto Transport, Hanson and Adkins Auto Transport, Pasha Distribution Services and United Road Services.

“Floridians have demonstrated a strong support for the VWoA brands and selecting the port of Jacksonville as our southeastern US port is part of our growth strategy in the southeast,” said David Geanacopoulos, executive vice president for Public Affairs and General Counsel, VWoA. “In fact, the Volkswagen Group sells more vehicles here than nearly every other state—Florida is our second largest market behind California. In utilising Jaxport, we will be able to bring Audi, Bentley and Volkswagen products closer to our Florida customers, and provide enhanced customer service in this key market.”

VW also exports volumes from Jaxport. These exports include the Passat, made in Chattanooga, Tennessee. The company has plans to build its new seven-passenger SUV at that plant and will export a percentage of these via Jaxport as well.

It also has an existing 24,000 sq.m parts distribution facility in Jacksonville.

At an event held to mark the announcementm Geanacopoulos was joined by Florida governor Rick Scott and Department of Transportation secretary Jim Boxold, along with representatives of VWoA, Amports, state and local dignitaries.