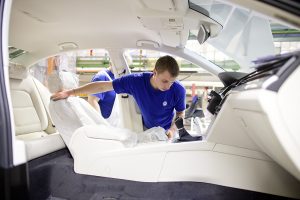 Following a recent fire that shut down one of the Czech Republic plants owned by interior materials supplier Recticel, Volkswagen has been forced to store Passat cars made at its Emden plant until enough replacement glove compartment covers can be delivered. However, while the cost to Recticel’s business currently stands at around €4m ($4.2m), including insurance deductibles, initial fears that 20,000 VW vehicles could be affected by knock-on affects down the supply chain has been scaled back.

“We are currently assuming a peak of 14,000 simultaneously affected vehicles,” a spokesperson told Automotive Logistics. “The affected vehicles are temporarily parked in outside parking lots in East Friesland, Emsland and the Diepholz district.”

The Belgian interiors supplier declared force majeure at its plant in Most on January 22nd after a serious fire broke out in one of the production halls.

Recticel Automotive’s Interior Division produces lightweight patented dashboard covers and door panel trims at 11 sites around the world – five in China and two each in the Czech Republic, Germany and the US, according to the company website (the other facility in the Czech Republic is at Mladá Boleslav).

A recent report from Germany’s Automobil Produktion suggested as many as 20,000 finished Passat vehicles from the company’s Emden plant would need to be stored until an alternative source of glove compartment covers could be found.

The company was said to be looking for available spaces within a radius of up to 100km including unused land at ports.

Last week a VW spokesman confirmed alternative supply had been sourced from a Recticel facility in China.

“We prioritised urgent vehicle orders in cooperation with our sales department,” said the spokesman, who added that the retrofit of the gloveboxes would take significantly less time than original estimated.

Another spokesperson from the company said: “Passat production continues as scheduled and the missing glovebox covers will be retrofitted from calendar week 13 [end-March].”

Wider impact on carmakersVW was just one carmaker affected by the supply problems caused by the fire. The others included BMW, Daimler, Renault and PSA Group. PSA previously confirmed to Automotive Logistics that production of the new Peugeot 3008 at the Sochaux plant in the east of France had to be halted for three days before being restarted on January 27th, due to problems with the supply of dashboards from Most.

“We stopped production but found another solution with Recticel from another plant in Germany,” said a PSA Group spokesman at the time.

Mercedes has also since said it too had “experienced a short-term logistic bottleneck” due to the fire, without elaborating further.

“The impact on our production was minor. In general our production is so flexible that we can counterbalance such an impact,” said a spokesman from Mercedes.

BMW responded to say that its own purchasing and logistics departments along with Recticel had “handled this issue and are working on solutions”.

“Due to the flexible BMW Group production system it is possible to react to this issue so that production is going on as planned.”

In a statement published on Monday (February 27th) Recticel said that intense engineering and contractor work had been going on for the last month in Most and other facilities to which work had been transferred.

“As a result, production has progressively restarted to the maximum possible extent on most of the parts originally produced in Most, and although the situation is not yet normalised, deliveries to the tier one customers have resumed where possible,” said the statement from Recticel.