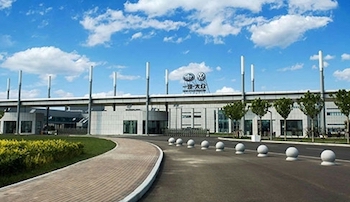 Volkswagen has officially opened an assembly plant with FAW at the port city of Tianjin, China. The FAW-VW Tianjin Plant will make VW and Audi brand SUVs, including PHEV models, with chassis parts and transmissions supplied from two other Tianjin-based facilities. The carmaker said that daily production was set for 1,200 units.

The new $1.9 billion facility is located in the Tianjin Economic-Technological Development Zone and the nearby VW FAW Platform Tianjin Branch facility, which opened in June this year, and will be supplying chassis components. In addition, transmissions are being supplied from the Volkswagen Automatic Transmission plant, also in Tianjin. The OEM said the strategy for local supply would result in lower supply costs and CO2 emissions, while improving the company’s reaction to customer demand and increasing the co-ordination of its car production.

“We are creating the state-of-the-art infrastructure needed to meet our goal of further activating our broad e-mobility strategy and SUV offensive,” said Jochem Heizmann, president and CEO of VW Group China.

The plant is also using the latest innovations in production technology. VW said a visualisation system had been adopted across the facility’s workshops, which processes and analyses production yield, manufacturing status and any production malfunctions.

Sales of SUVs in China have been on the increase in the last few years with 10m sold in the world’s biggest car market last year, which was a 25% year-on-year increase. However, sales of those models have shown a dip in recent months and were down 8% in July according to Bloomberg.