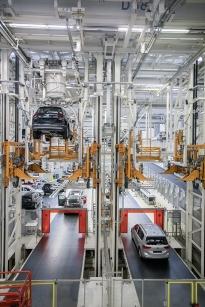 Volkswagen has reached agreements with two of its suppliers to end the disruption to output at six of its assembly and component plants in Germany this week. The suppliers are reported to be recommencing the inbound supply of parts and the plants affected will gradually restart operations, though it remains unclear whether this will be before the end of the week for all of them.

Slowdowns or stoppages of output at Volkswagen’s plants in Germany had widened on Monday to affect six of its plants, including its largest global assembly plant in Wolfsburg (pictured), as well as its main engine and transmission plants in Salzgitter and Kassel. The carmaker had put around 28,000 employees on Kurzarbeit, or ‘short working’, in which their hours are reduced but salaries are subsidised by the German government. Hundreds of companies across the supply chain were also affected.

The problems stemmed from a payment dispute with ES Automobilguss, which supplies cast iron parts for transmission assemblies, and Car Trim, which supplies upholstery and seat covers. The suppliers, which are both owned by the Prevent DEV Group, were refusing to release components because of claims that Volkswagen had demanded price cuts and cancelled contracts without giving a reason or compensation earlier this year.

Volkswagen took out an interim injunction against the suppliers. The Braunschweig District Court – in the state of Lower Saxony, which owns 20% of Volkswagen – ordered the suppliers to resume deliveries last week, however they still hadn’t on Monday, forcing further negotiations.

Volkswagen has not yet confirmed these details, however, and was not immediately available for comment.

The disruptions, which reportedly could have cost Volkswagen around €100m ($113m) per week in lost sales, came at a difficult time as the carmaker struggles to recover from the fallout over ‘defeat devices’ used in its diesel engines to falsify emissions tests. It faces hefty faces and payouts in the US and elsewhere over the matter.

The carmaker had previously said it would seek to make savings in purchasing as part of efforts to shore up profits at the Volkswagen brand in the wake of the diesel scandal.

While the dispute and production stoppages were damaging, and could have been worse, some of the models affected were set to see output reduced anyway. Volkswagen had earlier announced plans to stop production of the Golf for a week in October and December in response to demand, for example.

Huge impact across the supply chainThe crisis had spread across a large share of Volkswagen’s German production, and is likely to have impacted hundreds of companies in the supply chain.

Golf production at the main Wolfsburg plant, in the central state of Lower Saxony, was hit last week because of a shortage of gearbox components supplied by ES Automobilguss and on Monday the carmaker said it would have to halt production of its Golf hatchback all week (between August 22nd and 27th).

Wolfsburg made 815,000 vehicles last year, including six different Golf variants and the Tiguan and Touran vehicles.

Production of the Passat model at its factory in Emden, in northern Germany, was stopped on August 18th and was not due to start again until today (24th). Furthermore, Passat and Golf assembly at the Zwickau plant in eastern Germany was stopped for five days on Monday (August 22nd) but production could now resume before the 26th.

Three component plants were also affected by the situation because of parts shortages and because the company did not want an accumulation of components inbound to the assembly plants that would be redundant without vehicles in which to fit them, a spokesperson told Automotive Logistics. Some segments of transmission and exhaust system production at the Kassel plant in central Germany were facing disruption, as was production at two components plants in Lower Saxony: engine output was halted in Salzgitter, while production of chassis components and plastic parts at the Braunschweig plant was stopped on Monday to avoid overstocking.

The shutdowns would have been felt well beyond the walls of Volkswagen factories, stretching across the carmaker’s supply chain in Germany, Europe and possibly even beyond. According to the German Association of Supply Chain Management, Procurement and Logistics, as many as 500 companies were probably forced to slow production or build up inventories during the disruption.

Christoph Feldmann, managing director of the association, said in a statement that “the consequences for the entire supply chain are already considerable today”.

However, production is expected to resume at the component plants before the full seven-day shutdown originally expected, which will filter down to suppliers as well.

By Christopher Ludwig and Marcus Williams