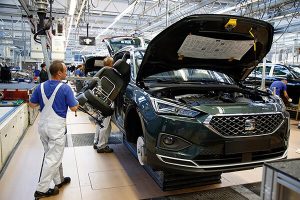 Spanish carmaker Seat, part of the VW Group, has begun producing its Tarraco SUV on assembly lines at VW’s Wolfsburg factory – the first time in 20 years a non-VW vehicle has been built at the plant in northern Germany.

Designed and developed in Barcelona, the Tarraco is built on the MQB platform and will roll off the production line alongside VW’s Tiguan and Touran models.

The introduction of the new model has not disrupted Wolfsburg’s existing supply chain and has required no major alterations to the plant, said a VW spokesperson.

“The Seat Tarraco is manufactured on the basis of the Tiguan Allspace, which is a long version of the Wolfsburg-Tiguan. Production components of the Allspace are implemented into the Wolfsburg body shop. That way it was possible to integrate the Tarraco into our production without any great changes,” he said.

The Tarraco is assembled in the same sequence as the MQB-A2 family but with a number of Seat parts integrated into the inbound flow to lineside. “To do so it was necessary to adjust and to expand several existing logistical supermarkets and part-deploy areas at the assembly line,” commented the spokesperson.

Once the Tarracos are assembled, they are delivered alongside VW’s regular production output from Wolfsburg. Only one or two new delivery destinations have been required, said the spokesperson.

In a statement, Seat said the step towards multi-brand production would boost capacity utilisation at Wolfsburg and improve the VW brand’s economic viability. VW said in August this year that it planned to boost overall annual output at Wolfsburg to 1m units by 2020.

Seat’s vice-president for production, Christian Vollmer, said: “The Seat Tarraco shows the collaboration among the Volkswagen group brands in order to generate synergies. This new SUV enables us to enter a new segment, gain sales volumes, boost our brand image and increase our capacity to generate margins.”