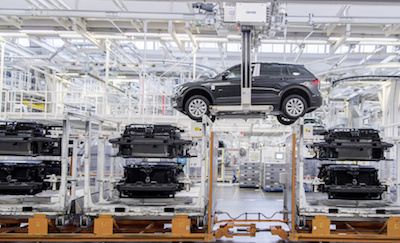 Volkswagen plans to increase annual production at its German plant in Wolfsburg to a million units by 2020, meaning an additional 210,000 vehicles will be assembled at the plant. The carmaker will shift Golf production from its Zwickau (Germany) and Puebla (Mexico) plants, and add production of the forthcoming Seat Tarraco SUV.

The increase is part of a plan by VW to increase productivity at its German plants by 25% by 2020 and make better use of their capacity.

Wolfsburg currently makes the Golf, Golf Sportsvan, e-Golf, Golf GTE, Golf GTI and Golf R. It also makes the Tiguan SUV and Touran minivan and will produce the Golf 8 when it launches next year, along with Golf variants currently made at Puebla and Zwickau. Zwickau is to become the new home of the I.D. range of compact electric vehicles while Puebla will shift to Tiguan production next year, including for export to the US and Brazil.

“A competent, globally leading production network is one of the biggest levers for value enhancement in the Volkswagen group,” said Andreas Tostmann, head of production and logistics at the VW brand, adding that further efforts were needed at VW for it to remain competitive.

The plant already handles incoming deliveries of raw materials, components and system modules from around 2,600 suppliers, which are delivered to the plant in 100 rail cars and 2,000 trucks every day on average, and this frequency and level of inbound material is set to increase.

The additional production will also put greater demand on the outbound logistics from Wolfsburg. The plant currently ships out around 3,200 vehicles a day on 180 double decker rail wagons and 185 trucks. Additional capacity will be required to distribute annual volumes of 1m.

VW said in a statement that it was focusing on “significantly reducing the complexity of production structures” and looking to standardise its global production network. That network now amounts to 120 plants across the group, with output above 10m passenger, commercial and two-wheel vehicles and a model portfolio of around 300. From a logistics perspective that means moving around 180m parts and 40,000 finished vehicles per day.