WTO agrees on customs plan but concerns over currency remain 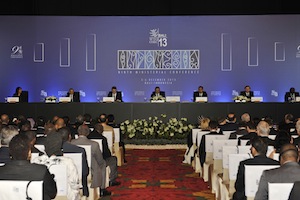 The World Trade Organisation (WTO) has unanimously approved a trade facilitation agreement designed to establish common customs standards and ease the flow of goods through borders around the world. It is estimated that it could lower the cost of carrying out trade by as much as 10-15%, according to the International Chamber of Commerce, as well as adding $1 trillion to global output. It is the first global trade deal WTO has approved in its 18 year history and is being widely lauded as boost to both the global economy and the reputation of the 159-member organisation.

The agreement, which was approved at the Ninth WTO Ministerial Conference in Bali, Indonesia on December 7, aims to remove obstacles such as the mandatory requirement of customs brokers and sets up an international trade facilitation committee to pursue to streamlining of bureaucracy.

More specifically, its stated objectives are: to speed up customs procedures; make trade easier, faster and cheaper; provide clarity, efficiency and transparency; reduce bureaucracy and corruption; and use technological advances. It also includes provisions on goods in transit, an issue particularly of interest to landlocked countries seeking to trade through ports in neighbouring countries.

To take effect it now needs to be ratified by two thirds of the member states.

For the global automotive industry, which is seeing an increase in the exchange of material between continents as multi-regional platforms proliferate, the agreement promises to ease the movement of parts and vehicles trade around the world.

"There is no doubt that trade, particularly to some of the more exotic places on the planet, is hampered by lack of transparency, standardisation and inefficiencies," said Ari Marjamaa, vice president and head of Global Market Intelligence at Wallenius Wilhelmsen Logistics (WWL). "Anything that can work to reduce that is good for trade. The fact that the deal goes straight to the matter on customs procedures and trade facilitation is very promising and if the enforcement and implementation lives up to its hope it should be a powerful stimulant for global trade."

Marjamaa highlighted the 'express customs service' that has been included as part of the deal, for companies that can demonstrate a strong compliance record, supply-chain integrity and security, as well as financial solvency and rigorous internal risk mechanisms. He said the rolling out of such a service across the WTO is likely to benefit large, experienced logistics companies that can prove their capabilities.

"This would, ideally at least, contribute to cutting delays to their shipments, and making the customs procedures consistent and effective," said Marjamaa. "Being a leading logistics player with well-developed systems, processes and capabilities, it could be expected that WWL would be in a position to be given such treatment which would represent an advantage for our customers."

Those customers are currently seeing shifts in ‘super regional’ flows, which makes the need for a transparent and more efficient customs procedure all the more important. The volume of vehicles from the Southeast US and Mexico to Europe, the Middle East and Africa (EMEA) is set to double by 2020, as well as similarly dramatic increases from Asia to EMEA as volume from India and Thailand fills lower segments in that region.

According to the World Economic Forum reducing barriers to trade could bring gains that far exceed tariff removal.

Speaking earlier in the year at Automotive Logistics Europe, Sean Doherty, director of Supply Chain and Transport Industry at the WEF said that reducing supply chain barriers, in areas including border administration, processing costs and infrastructure, could bring gains five or six times greater than if all the world’s tariffs were removed.

Talking to Automotive Logistics this week Doherty said that the WTO deal was good news as border delays are the major, relatively easily solvable trade concern for vehicles and parts trade. "The Bali deal is an important step, particularly for developing economies," he said, adding that WEF will be releasing an industry review of the automotive industry's trade concerns and opportunities at Davos in January.

Currency exposure
However, the issue of currency exposure remains a priority for carmakers and regional sourcing as a way of minimising this risk is an increasing trend.

This point is backed up by Ford, which said it was encouraged by the progress that was achieved at the WTO to streamline “the mechanics of trade” at the border, which were changes that would be helpful to its business.

“But, if the goal of negotiators is to expand the volume of trade, then currency manipulation is the 21st Century trade barrier that must be addressed,” said a Washington DC-based spokesperson for the carmaker. “Bipartisan majorities in the US House and US Senate agree – and we join them in urging the US trade representative in making it a priority in the Trans-Pacific Partnership [TPP] negotiation.”

According to WWL's Marjamaa, accusations of currency manipulation can stem from a failure to distinguish several contributory factors.

"Currency fluctuations are partly driven by national macro factors, partly by the global financial markets and partly by national governments as a tool to foster economic development," he said. "It is however, not always easy to tell the three factors apart and it will thus always be a contested issue and from time to time the source of accusations of unfair manipulation."

Marjamaa said that while there may be cases of currency manipulation it is not clear how a trade agreement could limit it without distorting the natural and necessary stabilization element of a fluctuating currency. Pointing to the fact that it is the first real breakthrough in two decades at the WTO, Marjamaa said it was important to take one step at a time and allow the the deal to prove its worth on an operational level.

Trans-Pacific Partnership
The TPP free trade agreement that Ford referred to is being negotiated in Singapore this week between Australia, New Zealand, the US, Peru, Chile, Mexico, Canada, Singapore, Brunei, Malaysia, Vietnam and Japan.

Ford pointed to the fact that in June this year 230 members of Congress sent a letter to President Obama calling for TPP negotiations to include “strong currency disciplines”. This was followed in September by a letter from 60 senators urging Treasury and US trade representatives to address currency manipulation in future trade pacts, including TPP.

According to Robinet the major drivers determining an OEM’s vehicle sourcing structures are varied. They include capacity and fixed investment positions, logistics for vehicles and their components, the ability to reach appropriate scale, quality, currency dynamics and inventory considerations.

“In the end, today’s vehicle sourcing framework is more flexibility with an ability to react more quickly to market changes due to most offerings being based from global structures,” Robinet told Automotive Logistics. “The pendulum is now directed towards eliminating currency risk through greater regional sourcing of mass market vehicles and a need to control exposure to rising vehicle shipping costs.”

The strength of concern felt by US carmakers is seen in a recent statement about the TPP negotiations from the American Automotive Policy Council (AAPC), which represents the concerns of Ford, Chrysler and GM.

“The prospect of including Korea in the TPP reinforces the importance of including strong and enforceable currency provisions in the agreement,” said the AAPC’s president Matt Blunt. “In the past, the Korean government has intervened frequently in the foreign exchange markets to manage the value of the won to gain or retain a competitive advantage. It is critical the TPP include meaningful currency disciplines to ensure that current and future TPP members, especially those with a history of intervening in currency markets, do not use that tool to undermine market access commitments.”