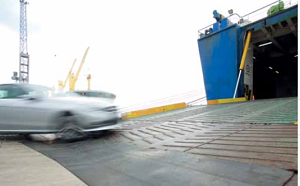 WWL and DB Schenker’s Cargo division have agreed to develop a multimodal logistics hub in north-east Italy that will cut the transport time for vehicles to Asia by eight days compared with routes from northern Europe.

The port of Monfalcone, near Trieste, is the northernmost port in the Adriatic Sea and the closest to central Europe.

“With this joint venture, we are meeting the demands of OEMs to introduce a solution that will reduce the transport time to Asia and simplify the supply chain,” said Andreas Busemann, chairman of sales at DB Cargo (previously known as DB Schenker Rail).

Development will begin in 2017 at the port and WWL will own 51% of the venture. Compagnia Portuale Srl a Socio Unico will serve as the local terminal operator at the port.

According to the port’s official website, it already hosts a 100,000 sq.m vehicle area with a capacity of about 125,000 cars per year.

It is also situated within the same gulf as the port of Koper in Slovenia from which Mercedes-Benz last year became the latest OEM to begin exporting shipments to the Far East.

In 2015, Koper handled a record of more than 600,000 vehicles across both exports and imports.