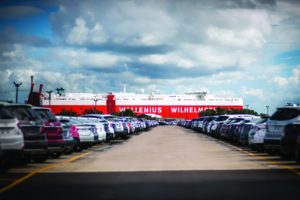 Wallenius Wilhelmsen Logistics (WWL) has reported strong results for the third quarter this year thanks to what it called "continued positive development in ocean volumes and cargo mix" across global lanes, including shipments of mining equipment. The company also said that progress was being made in its organisational restructuring and procurement, which is helping it toward a $100m "synergy target" by 2019.

Adjusted earnings were up 2% on the previous quarter this year to $193m while total income over the same period came in at $962m, up 5%.

Increased exports of cars and machinery from China to the US have also helped increase third quarter earnings.

At the same time, the Europe to Asia trade was mostly driven by an increase in volume to China (up by 24,000 CEU) and South Korea (up 5,000), due to increasing demand for European brands.

WWL said volumes year-over-year had increased by 10%, primarily driven by an increase in transported volumes from Asia to North America of 23% and from Europe to Asia of 11%.

Shipments from South Korea have also shown improvement in the third quarter compared to the same period last year because annual strike action by Hyundai workers in the country has not been as severe. Last year, staff staged a country-wide walkout, resulting in a production loss of 117,000 vehicles.

“We are pleased to see the improved results in the third quarter which is normally weaker than the second quarter,” said Craig Jasienski, president and CEO of WWL ASA. “The results are driven by stronger volumes than anticipated, good trade mix on Ocean as well as reduced costs. On the other hand, we are still faced with tough competition and pressure on rates. We are well on the way with synergy realisation, but the next wave of synergies will take more time to achieve.”

On land, adjusted earnings were down $3m or 9% compared with the previous quarter. The company said this was down to reduced value-added services coupled with volume congestion at certain plant locations. However, they were significantly improved compared to the corresponding quarter last year, according to WWL.