ABP invests in quality control for BMW at Southampton 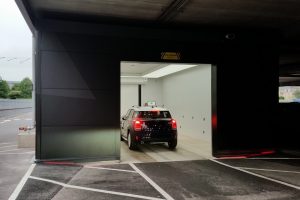 Digital imaging technology provided by Degould, including two drive-in booths, have been built in the multi-deck areas of the facility, which will be used to monitor all BMW and Mini vehicles arriving and departing from the port.

Ed Jones, managing director of Degould, said: “We use the latest digital imaging technology and automation to capture super-high resolution, 360-degree condition reports of the vehicles. The process takes just a few seconds and the data is available in real-time to review on any device.”

A spokesman for BMW said the technology would enable it to keep instantly accessible records of all its vehicles arriving at and deporting from the port.

ABP Southampton director, Alastair Welch, said: “This is an important milestone for the port. With many thousands of vehicles passing through each year, it is vital to ensure they leave us in the best possible condition.”

Nearly £1m has been spent on the upgrade with a further £15m investment allocated for a new multi-deck facility being built in the Eastern Dock of the port to store an additional 3,000 vehicles.

With 11 shipping lines undertaking 110 calls to 52 ports in 40 countries every month, Southampton is the UK’s biggest export port.