BLG and Fenix commit to expansion of services at Bronka 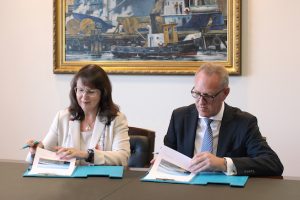 German logistics provider BLG Logistics and LLC Fenix, the owner and operator of the Russian port of Bronka, have signed an official letter of intent for joint future development of finished vehicle handling at the port.

BLG Logistics has been working with Fenix for six months at the port already, following an open-ended agreement set up last year.

BLG Logistics said that following the setup of the necessary port infrastructure and the start of operations in December 2016, the port had so far handled 18,000 units, including those from Volkswagen.

The port of Bronka, which is part of the Big Port of St Petersburg, opened in 2015 but prior to the activity established by BLG and Fenix, only spot ro-ro shipments had been made to the port.

Following the signing of the letter of intent by Port of Bronka shareholders’ representative Elena Glukhova and Frank Dreeke, CEO of BLG Logistics Group (pictured), the companies now have further plans to target a wider range of services for customers. The partners also intend to increase capacity, subject to market demand.

Bronka currently has a 12-hectare storage area within a total footprint of 120 hectares, so there is plenty of room for expansion and in May this year, an additional 2,500 parking lots were put in, bringing the total to 6,000.

The rate of expansion could be gradual, given recent analysis of the Russian car market’s recovery presented at the Automotive Logistics Russia summit in Moscow recently.

Car production in Russia grew by more than 20% in the first five months of the year, according to figures from Gazprombank, though light vehicle sales are lagging slightly and are expected to end up at around 1.6m units this year, up around 400,000 compared to last year. The previous high of around 3m light vehicle sales per year in Russia is now unlikely to be realised before the end of the next decade. However, the commercial vehicle sector is recovering at a faster pace.

Nevertheless, the agreement is a vote of confidence in the recovery of the Russian car market and BLG is moving all its terminal activity from the City Port in St Petersburg, where it has been since 2009. A spokesperson for BLG said last December that annual volumes through City Port stood at around 50,000 units, but this will all move to Bronka port along with operations including vessel discharge, storage, truck loading and stock maintenance.

According to Fenix, the ro-ro terminal at the six-berth port will be able to handle 260,000 units but this is expected to hit 500,000 vehicles when fully developed. The ro-ro terminal port has a 12.4-metre depth of berth to handle large car carriers.

BLG and Fenix said they were convinced the joint offer would not only be attractive for cargo and clients that are already active in the port of St. Petersburg but would also attract clients from other ports in the wider region and cargo that is currently routed overland.

BLG will also be providing hinterland road services, alongside other domestic providers.