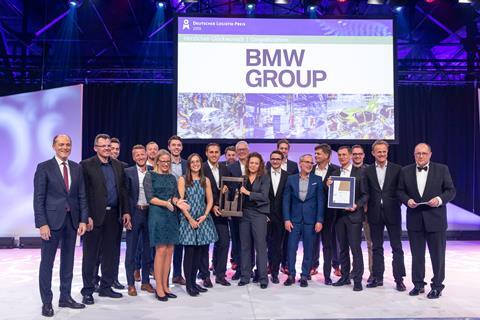 The carmaker received the prize for its Logistics Next projects, which employ Industry 4.0 technology, artificial intelligence (AI) and autonomous transport systems used to support production at BMW plants in Germany. BMW said the focus of Logistics Next was on the use of logistics robots and digitalisation for an end-to-end supply chain governed by four key principles: autonomy, transparency, networking and collaboration.

The applications are controlled via open systems and standardised across four BMW plants: Dingolfing, Leipzig, Regensburg and Munich.

At BMW’s Leipzig plant, for example, the carmaker has been using an autonomous transport system called AutoTrailer to bring semi-trailers from the parking area to the unloading station. The AutoTrailer can handle a payload of up to 30 tons and navigates by laser without additional guidelines or markings through the plant’s outdoor areas. Sensors and cameras provide a 360-degree view of its environment. 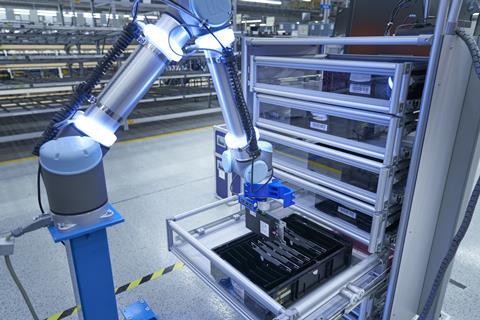 It is also using its Sortbot (pictured) at Leipzig to detect small loads with the aid of 3D cameras and AI. Once detected the robot can find the optimum gripping point and stack the containers on a pallet using suction grippers. The robot saves employees having to carry out strenuous and repetitive tasks.

Meanwhile at Dingolfing, BMW has been using another autonomous system that moves loads of up to 25 tons in the plant.

BMW Group joined forces with the Fraunhofer Institute IML back in 2015 to develop its first self-driving smart transport robots for moving roll containers through logistics areas within plant production halls. According to the carmaker the second generation is now in operation at its Regensburg plant. The flat robots carry roll containers weighing up to one ton and transport them autonomously, calculating the ideal route independently. A built-in battery module from the BMW i3 powers the transport robot for a whole shift.

The latest innovations join others already being deployed in trials at BMW’s plants including pickbots, placebots and splitbots under the Logistics Next initiative.

“We have a clear vision of the future and deal with the technologies of tomorrow at an early stage,” said says Jürgen Maidl, head of logistics for BMW Group’s production network.

“With our innovative approaches, we can operate the increasingly complex logistics processes efficiently, make them more transparent and thus further develop our production system.

BMW beat finalists Airbus and Loxxess and the 17-member jury headed by Matthias Wissmann, president of the VDA, the German automotive industry association, said that was because BMW’s digital transformation was already well advanced.

“The long-term nature of the goals and plans, the consequence in the implementation and the enthusiasm of the project participants and their team spirit are refreshing, innovative and exemplary – just like the cross-location cooperation between production, logistics and IT,” said Wissmann. “All this convinced us. The BMW Group was already in the lead in the first round of voting and according to the reports of the auditing team, the jury’s vote in the second round was even unanimous.”

Around 1,800 suppliers at more than 4,000 locations deliver over 31m parts to 30 BMW Group production sites worldwide every day. The carmaker said that digitalisation and innovations help the company organise logistics more flexibly and efficiently.

The BVL’s German Logistics Award recognises logistics concepts from industry, commerce and the service sector with a focus on how innovation.