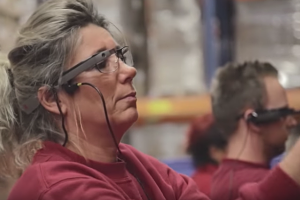 Following a successful international trial period, DHL Supply Chain says its augmented reality smart glasses are now “business as usual” in its warehouses around the world.

Last August the company, along with partners Google, Vuzix and Ubimax, said it would be expanding a ‘Vision Picking’ trial based on smart glasses, from the Netherlands to other locations around the world.

Since then, it has completed tests and developed the product further across the US, mainland Europe and the UK throughout different industries such as technology, retail and consumer.

“We are very satisfied and happy that the pilot phase went so well and that we can now say augmented reality technology is one of our standard offerings at DHL Supply Chain,” said Markus Voss, chief information officer and chief operating officer at the company.

DHL’s international trials have shown an average improvement in productivity of 15% and higher accuracy rates as a result of using the technology. It has also halved new employee integration and training times, according to the company.

The smart glasses provide visual displays of order picking instructions along with information on where items are located and where they need to be placed on a cart.

Hendrik Witt, CEO of Ubimax, said: “DHL demonstrates the potential xPick and smart glasses can unlock in warehouses and sets a leading example in the evolution of wearable technology becoming mainstream for enterprises.”

DHL said that following the success of the Vision Picking program, it was looking into additional applications for augmented and virtual reality including training, maintenance and dimension calculations.

A recent report from business consultancy Frost & Sullivan highlighted that the emergence of the Internet of Things (IoT) and growing use of real-time data, monitoring and tracking are boosting the development of wearable technologies in the industrial sector.