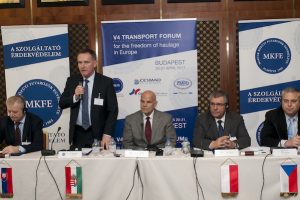 The leaders of four of eastern Europe’s main road haulage associations have signed a declaration aimed at resolving what they see as a distortion in Europe’s transport regulations and the principle of free movement of goods.

The four business associations operate in the Czech Republic, Hungary, Poland and Slovakia (also known as the Visegrád Four or V4) and represent about 9,800 businesses operating 172,000 trucks and trailers.

Their declaration was signed in response to “social dumping and unfair competition charges” raised against road hauliers in eastern Europe by rival western European companies.

The RTA said it would ensure that road freight transport was carried out in “healthy, fair competition between economic actors” and would seek to guarantee workers’ social rights.

Last week, however, top officials from ZMPD (Poland), Cesmad Bohemia (Czech Republic), Cesmad Slovakia and MKFE, the Association of Hungarian Road Haulers, met in Budapest to sign a declaration calling on the European Commission (EC) to finalise its legal assessment of the action taken by the other European countries. The EC is currently working on legislation designed to harmonise the road transport sector.

The declaration expressed disagreement with the action taken by the RTA, which was described as “derogatory to the fundamental values of the EU, namely [the] free movement of goods [and] services”.

It added that each of the associations was ready to take part in “constructive dialogue to find common solutions with the players of the European road transport market”.

However, it pointed out that the Commission’s legislative process could take years to finalise and that hauliers based in the V4 countries were facing urgent competitive pressures on a daily basis.

The document urged the EC to finalise its decision-making process and provide a legal assessment of the situation. It also called on the EC to put the matter of western European states’ minimum wage policy to the European Court of Justice.

The joint declaration also urged German, French and Austrian authorities to introduce an immediate moratorium on the application of their current minimum wage regulations relating to international road transport operations, until such times as the new EU-wide legislation came into effect.

The document was signed by Jan Buczek, chairman of ZMPD of Poland, György Wáberer, president of the Association of Hungarian Road Hauliers, Josef Melzer, vice-president of Cesmad Bohemia, and Pavol Hudák, vice-chairman of Cesmad Slovakia.