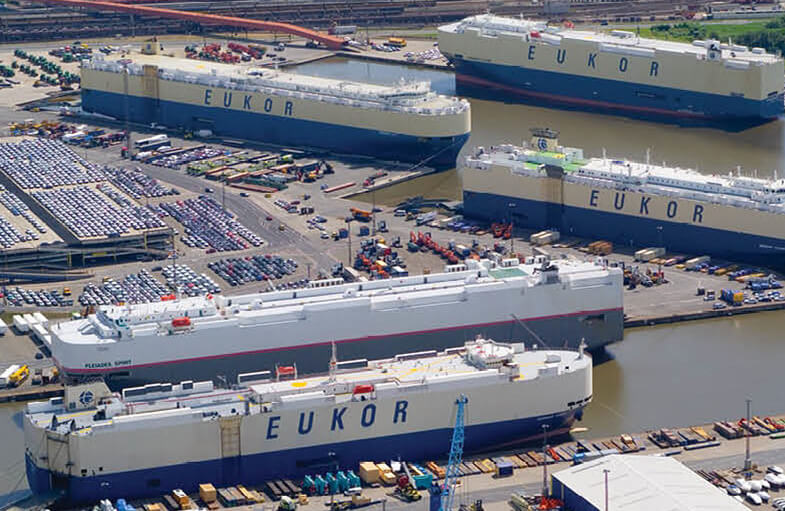 Four of the major providers of ocean services to the automotive and commercial machinery sectors were fined €395m for their participation in a cartel that ran from six years from October 2006 to September 2012. The cartel involved Chilean carrier CSAV, Japanese carriers K Line, Mitsui OSK (MOL) and NYK Line, as well as Norway’s WWL, including its subsidiary Eukor. MOL was not fined in the action (saving it €203m) because it made the immunity application that started the investigation. The other four received reduced fines in acknowledgement of their cooperation during the investigation.

According to the EC, the carriers had agreed to maintain the status quo in the market and to respect each other’s traditional business on certain routes, or with certain customers, by quoting artificially high prices or not quoting at all in tenders issued by vehicle manufacturers.

Margarethe Vestager, European commissioner in charge of competition policy, said the companies met for six years in a range of locations to discuss their cartel strategy.

“In those discussions, the five companies coordinated prices, divided up customers between them and exchanged commercially sensitive information that could help them align their prices,” she stated. “Instead of competing, they gave each other a free hand on certain routes or with certain customers, by deliberately quoting high prices or not quoting at all in tenders by carmakers.”

The fines ranged from €7.03m for CSAV to €207.3m for WWL/Eukor. In determining the amounts, the EC said it took account of the sales value of services provided, the serious nature of the price-fixing, its geographic scope and the length of time it went on.

NYK has since issued a statement underlining its commitment to complying with the laws and regulations of Japan and all other jurisdictions. “Nevertheless, NYK wishes to express its sincere regret to shareholders, customers and all relevant personnel for the concern caused by this matter. NYK will continue to make a best effort to prevent recurrence and to recover trust as a company,” it added.

The EC’s fines are the latest in a string of penalties worldwide to have hit the shipping sector over competition issues in recent years, and follow fines imposed on some of the same car carriers by Mexico’s Federal Economic Competition Commission last year.

Further cartels end in tiersMeanwhile, the EC has also fined tier one suppliers Bosch and NGK a total of €76m for their part in a cartel also involving Denso that lasted 11 years from 2000 and involved the manipulation of prices for spark plugs.

According to the EC, the companies agreed not to compete for each other’s traditional customers and, in some cases, agreed on the prices quoted to certain customers and the share of supplies to specific customers. They also exchanged commercially sensitive information. Denso prompted the investigation with its immunity application.

Bosch has also been fined for its part in a separate cartel with Continental and TRW and another one just involving Continental, both of which involved hydraulic and electronic braking systems. The EC said that in both cases, the companies exchanged confidential information on pricing elements.

Bosch and Continental were fined €75m for their part in the cartel with TRW, while TRW avoided a fine for disclosing the matter. Continental avoided a second fine relating to its separate price-fixing with Bosch for its disclosure in the second case.

“These decisions are just part of the work we’ve been doing recently to defend fair competition in the markets for cars and trucks,” said the EC in a statement. “We’ve imposed fines of over €6 billion in ten cases involving the car and truck markets. And we will be active in this area as long as we keep finding companies that hope to make higher profits by colluding instead of competing.”

The Commission said it had a separate investigation going on into concerns that several German carmakers might have broken EU competition rules.