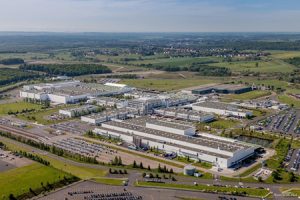 Germany’s Mercedes-Benz Cars has chosen the Hambach factory in France as its base for assembly of a compact electric car under its EQ brand, part of a wider expansion of the company’s electric vehicle (EV) manufacturing capabilities.

Preparations for the new model will start shortly, with around €500m ($585m) being spent on construction of new facilities and product flow, the company says. This will include a new state-of-the-art body shop and surface treatment unit, as well as reshaping of existing infrastructure. The OEM has not provided details of the implications for warehousing or parts flow, or commented on the logistics requirements of shipping EV components, including batteries, to the site.

Hambach has long produced EVs, starting in 2007 with a pioneering battery-powered Smart, followed by the Smart EQ Fortwo coupé and cabrio electric models from 2012. Around 2m Fortwos have rolled off the assembly line to date, which is arranged in the form of a plus sign to best meet production and logistics requirements.

Smart CEO Annette Winkler said the €500m investment was effectively a vote of confidence in the employees, who currently number more than 800, after they signed the Pacte 2020 agreement which significantly improved the site’s competitiveness, raising the working week to 39 hours from 35 hours.

Markus Schäfer, production and supply chain executive with Mercedes-Benz Cars, said: “With the production of a compact electric car in Hambach, we are adding further capacities for our electric initiative at six locations on three continents. The smart plant in Hambach will become a part of our global compact car production network with the lead plant Rastatt, Germany.”

The Hambach investment is part of an €11 billion outlay on producing electric-powered vehicles by Mercedes-Benz Cars. The other EV production sites are in Bremen (Germany), Rastatt (Germany), Sindelfingen (Germany), Tuscaloosa (US) and BBAC (China).

The company plans to launch more than ten EVs by 2022 across all segments and expects electric models to represent 15-25% of sales by 2025. To support the change, Mercedes-Benz Cars is creating a global battery-production network of six factories on three continents.

The introduction of a Mercedes-Benz model at Hambach also marks the first time in the OEM’s 100-plus-year history that it has produced the brand in France.