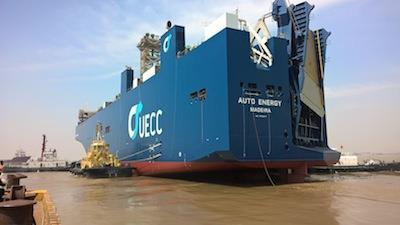 “UECC is very pleased to launch this new North Sea service and finally add Denmark to our pan-European, short-sea shipping network, as well as adding Gothenburg as our third port of call in Sweden, in addition to our existing service to Malmo and Wallhamn,” said UECC’s CEO Glenn Edvardsen.

The Norwegian shipping company can now offer two sailings per week between Zeebrugge and Drammen. The first departure from Zeebrugge with the new North Sea service will be on April 7.

Initially, UECC plans to deploy the M/V Minchah in the new North Sea service and then likely replace this with two new multi-fuel LNG battery hybrid PCTCs that are currently under construction.

UECC has already taken delivery of the first multi-fuel LNG battery hybrid PCTC, the Auto Advance, in a series of three newbuildings.