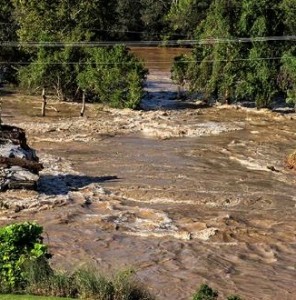 [Updated October 9th] Devastating flooding in the US state of South Carolina in the wake of Hurricane Joaquin has left seven people dead and cut power to thousands of people across the state. The deluge, which affected central and coastal areas, has also hit vehicle makers in the region, including BMW and Daimler, as well as affecting dealers.

The storm caused more than 20 inches (51cm) of rain to fall on parts of central South Carolina over the past weekend and into Monday, with conditions predicted to continue into the week. The Congaree river rose 10 feet (3 metres) in 12 hours, according to reports, and the impact has been described as a 1,000-year event in much of the local press.

Many businesses, including dealers, have remained under water this week with heavy losses reported. According to the South Carolina Automobile Dealers Association (SCADA), the devastation is unlike anything that the community has seen, and the cost is human.

"Our dealerships are part of these communities that have been devastated by the historic floods and rainfall,” said E. Sims Floyd Jr, executive vice-president of SCADA. “The disaster is unlike we have ever seen. We have many businesses and homes that have been destroyed and precious lives have been lost.

“We have a long, long way to recovery but South Carolinians are resilient and this difficult time will bring all of us closer and stronger as neighbours,” he continued.

Looking ahead, Floyd told Automotive Logistics that SCADA would work along with its dealerships across South Carolina in the communities affected, to rebuild and recover.

Supply networks hitWhile BMW has maintained production at its Spartanburg plant, which is upstate, it has had to delay the rail shipment of finished vehicles to the port of Charleston because of the flooding.

“Because we export 70% of the vehicles produced at the plant, the rail transfer of finished vehicles through Columbia headed to the port of Charleston will be delayed due to extensive flooding in the Columbia area,” a spokesperson for BMW Manufacturing confirmed. “BMW is working closely with state authorities to assess alternative options, including movement by truck to the port of Charleston.

The carmaker thanked first responders, emergency services personnel and volunteers who were responding to the various needs throughout the state.

Meanwhile, Daimler’s van plant in Ladson, which makes the Mercedes-Benz Sprinter commercial vehicle, had to shutdown on Monday this week because of road closures affecting the inbound supply of parts and staff access to work. A large section of Interstate 95, a major East Coast highway, was closed because of high water.

"Daimler Vans Manufacturing was not running its production line on Monday [October 5th], because of the many road and school closures, and to allow employees to address domestic requirements," a spokesperson said. "However, the plant itself has not been affected by the flooding. The production resumed on Tuesday and they are going to make up the lost time on Saturday."

Hurricane Joachin has also been responsible for the sinking of a ro-ro cargo ship off the coast of the Bahamas over the weekend. The search for survivors of the El Faro – which was manned by 33 crewmembers – is continuing. So far only one body has been found, along with a heavily damaged lifeboat and various debris from the vessel.