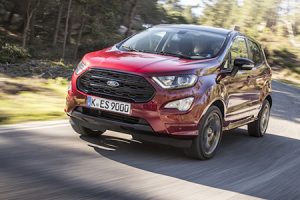 Imports of the Ford EcoSport compact SUV into the UK from Romania are now fully underway via the port of Constanta, the carmaker has confirmed.

Ford began production of the the EcoSport at its plant in Romania in October last year and said the shift to Europe from production at its Indian plant in Chennai would help it respond to high demand for this and other crossover models.

The EcoSport had been imported from India into Europe since it launched in the region back in 2014.

According to its latest results, Ford sold 62,700 EcoSports in 2017, up around 5,500 on the previous year, and the UK was the company's top market by registration.

The company has seen an overall increase in sales of crossover models in Europe over the last year.

Ford sports utility vehicle (SUV) sales were up 24.3% for the year, driven by its best ever sales for the EcoSport, Kuga and Edge. Ford sold 230,600 SUVs in its Euro 20 markets – approaching one in every five new Ford vehicles sold in Europe.

“Ford has sold 150,000 EcoSport compact SUVs in Europe since we first introduced the model to the region in 2014, and last year sales grew 40%,” said Steven Armstrong, group vice-president and president, Europe Middle East and Africa at the OEM.