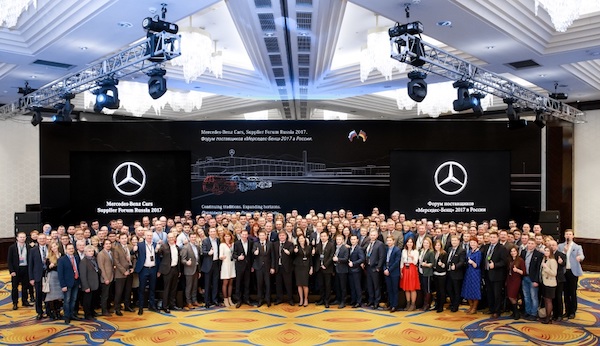 Mercedes-Benz held its first supplier network forum in Russia last week, part of its investment strategy into the Russian market, according to Axel Bense, CEO of Mercedes-Benz Manufacturing Rus.

The forum is designed to expand the company’s supplier network in the country as it looks toward production in 2019 at the car plant it is now building near Moscow.

The Daimler-owned German carmaker broke ground on the plant at the Esipovo industrial park, 40km from Moscow, in June this year and established Mercedes-Benz Manufacturing Rus as the division to run the passenger car plant. It is investing €250m ($293.5m) in the plant, which will begin with production of the E-Class sedan and follow that with SUV model assembly.

"The development of the passenger car production in Russia is a strategic investment in an important sales market for Mercedes-Benz," said a spokesperson for the carmaker. "We are expanding our local footprint and at the same time strengthening our global competitiveness."

More than 100 suppliers attended the forum, held on November 10th in Moscow, and were joined by Mercedes-Benz executives from purchasing, quality and production, along with representatives from politics and business.

“We will produce our best-sellers for the regional market at the new Mercedes-Benz Moscovia plant on a fully flexible basis,” said Dr Klaus Zehender, member of the divisional board of Mercedes-Benz Cars responsible for procurement and supplier quality. “To do so, we count on local partners that provide us with top quality and innovations. Thus we are following our general localisation strategy to buy materials where our production operations are based.”

Daimler already has a supplier network supporting its joint venture truck and van plant with Kamaz, located in Naberezhnye Chelny, which has been making vehicles since 2010. Daimler Kamaz Rus (DK RUS) makes and distributes trucks of Mercedes-Benz and Fuso brands in Russia. It will also be involved in Mercedes-Benz Manufacturing Rus.

In a separate development, Daimler Kamaz Rus is reported to be investing in a separate facility in Tartarstan to make truck cabins. Kamaz has independently reported a figure of 100 billion roubles (€400m) but according to Mercedes-Benz's spokesperson this relates to overall Kamaz actvities.

"Part of the investment will be used for joint localisation activities in cab production and in the procurement collaboration of the joint venture," said the spokesperson.

Premium carmakers, such as Daimler, are looking at production in Russia for a number of reasons, one of which is the new state procurement scheme that will oblige regional and federal authorities to purchase only vehicles manufactured in Russia for their own official use. The law was first proposed back in 2014.

BMW has also confirmed plans to build an assembly plant in Russia to produce vehicles for the domestic market with localised parts.