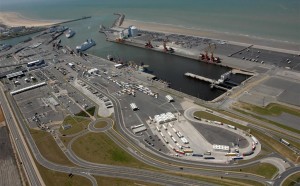 Freight movements between continental Europe and the UK continue to be disrupted by conflict at the port of Calais in France, as migrants trying to reach the UK via the Channel Tunnel clash with French riot police.

The migrants are targeting the Channel Tunnel’s freight terminal in repeated attempts to gain access to trucks and trains travelling into the UK. According to one BBC report there were 1,700 intrusions into the freight terminal on Sunday night/Monday morning this week.

French riot police used tear gas to force back a group that had broken through fencing into the Channel Tunnel terminal over the weekend.

The UK government said that between June 21st and July 11th this year, over 8,000 attempts by illegal migrants were successfully intercepted at juxtaposed ports in France through the joint efforts of the French and British authorities. Meanwhile, EuroTunnel reports there have been 37,000 attempts by people to get to Britain this year.

According to the UK Borders Agency, the number of illegal stowaways through Calais doubled to 1,463 last year, from 782 the year before.

Eight migrants have died attempting to reach the UK in July compared to 16 for the whole of 2014, according to the Calais Migrant Solidarity group’s website.

Industrial action and security
Traffic flow through Calais has been hit by disruption for weeks. Along with the migrant problem in Calais, freight and passenger services have been affected by industrial action by the Syndicat Maritime Nord union. The union went on strike earlier in July in response to the transfer of vessels from MyFerryLink by Eurotunnel to DFDS following Eurotunnel’s takeover of the former SeaFrance operation.

Stalled traffic as a consequence of the strike action was more vulnerable to attempts by migrants to board vehicles. “Tailbacks at Calais caused by the strike have made stationary vehicles more attractive to stowaways,” noted Fred Cesarion, commercial director for UK expeditor, C4 Logistics.

While traffic flow has now improved, security remains an issue.

The UK’s Freight Transport Association (FTA) has reported to the UK government’s Home Affairs Committee about members who have been faced with what it called “intimidation, threats of violence, damage to vehicles and spoiled cargoes” while waiting at the port.

The UK government has announced a new secure lorry-parking zone at the port, which is able to accommodate 230 trucks.

“Calais is a vital trade gateway, with £89 billion passing through the port every year,” said James Hookham, deputy chief executive of the FTA. “We cannot allow the migrants to put this in jeopardy – already millions of pounds have been lost in delays, damage to vehicles and spoiled cargoes.”

This week the association said that continued disruption could hit confidence in rail freight services through the Channel Tunnel.

“What is likely to happen as a consequence is that confidence in rail freight as a viable alternative to road will be undermined,” said Chris MacRae, FTA’s head of rail freight policy. “We saw this happen a decade ago when migrants were trying to board freight trains to reach the UK – it was a serious set-back for Channel Tunnel rail freight.”

Meanwhile, on the UK side of the tunnel, Operation Stack – the tactic implemented on the M20 motorway to park lorries during times of industrial action or other disruption – has now been called off. Traffic along the M20, the main road link between the port of Dover and the London orbital M25 motorway, is moving again.

Emergency logistics
Automotive companies affected by the disruption at Calais – both industrial action and migrant attempts to board vehicles – have been forced to resort to emergency logistics services.

One of the providers of those services, Priority Freight, said it had seen a significant increase in expedited freight requests over the past two months.

“While most manufacturers expect some expedited services to meet customer requirements, the ultimate goal is to reduce that need,” said Ed Bembridge, operations manager at Priority Freight. “However Operation Stack has meant manufacturers have had no choice but to find alternative, more costly transport solutions, such as emergency airfreight. Additional costs affect margins, having a bigger impact on the manufacturing industry.”

According to Fred Cesarion, the strike and migrant crisis have converged to create “a perfect storm” that calls for a broader political response to keep trade flowing.

“Ports and the Channel Tunnel are strategic trade routes from the UK to Europe, and as such should be treated as an important gateway for the free flow of goods,” said Cesarion. “We cannot have situations where dangerous fires are started resulting in the closure of the Channel Tunnel. It should be the government that places greater protection around the ports – including the use of the army – if necessary.”

According to C4 Logistics, additional pressure on carriers has been caused by the refugee crisis from north Africa where stowaways have risked their lives to board vehicles or trains bound for the UK.

“We have a very strict immigration and security procedure because of recurrent problems crossing the Channel, despite the best efforts of the French and UK border controls,” said Cesarion. “So, we ask our drivers to do all that they can to make sure that no persons have gained entry to their vehicles in transit. This includes taking advantage of the voluntary CO2 checks.”

At the end of the day, however, the real issue behind the disruption to traffic caused by the migrant crisis is a humanitarian one.

“Of course we need to look at ways of easing traffic flow in Kent, to allow people and businesses to return to some semblance of their normal routines,” said Priority Freight’s Bembridge. “However, the ultimate responsibility rests with the leaders of Europe to find a compassionate solution to remedy the ceaseless misery caused by what is a very human problem.”