UK car manufacturing fell by almost 29% in November to 75,756 vehicles, according to figures recently released by the Society of Motor Manufacturers and Traders (SMMT).

[Updated Jan 14] It is the lowest production for the month since 1984 and represents the fifth consecutive decline in UK vehicle manufacturing as carmakers struggle with the shortage in the supply of semiconductors. 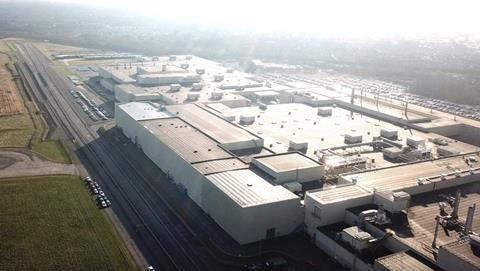 It is the lowest production for the month since 1984 and represents the fifth consecutive decline in UK vehicle manufacturing as carmakers struggle with the shortage in the supply of semiconductors.

Production for both domestic and export markets was down by 18.8% and 30.4% respectively in the month, with around 30,500 fewer cars produced. The SMMT reported that up to the end of November UK vehicle manufacturing has produced just more than 797,000 vehicles, almost 432,800 fewer than pre-pandemic 2019.

“These are incredibly worrying figures, underscoring the severity of situation facing the automotive industry,” said Mike Hawes, chief executive of the SMMT. “Covid is impacting supply chains massively, causing global shortages – especially of semiconductors – which is likely to affect the sector throughout next year.”

Hawes went on to say that the combination of a negative economy, rising inflation and a resurgence is Covid cases, both in the UK and overseas, was making for one of the toughest situations for the sector in decades.

“With output massively down for the past five months and likely to continue, maintaining cashflow, especially in the supply chain, is of vital importance,” he said. “We have to look to government to provide support measures in the same way it is recognising other Covid-impacted sectors.”

Output from the UK has also been affected by the closure of Honda’s plant in Swindon (pictured) in July last year.

Total registrations for new cars in the UK in 2021 increased a marginal 1% on the previous pandemic year, standing at 1.65m, 28.7% down on 2019 and representing the second worst year since 1992. The SMMT’s latest forecast for 2022, which was published in October before the rise of the Omicron variant, is for 1.96m new car registrations.

Battery electric and hybrid vehicles accounted for around a third (32.7%) of all cars actually made in the UK in November, and more than a quarter (25.5%) up to that point in 2021. The UK finished 2021 as the third largest European market for new car registrations but the second largest by volume for plug-in vehicles and the second largest for BEVs. It is only in ninth position overall, however, in Europe for BEVs by market share.

BEV output was up in November by 52.9% to 10,359 units, hitting a new high of 13.7% of all production, more than double the level a year ago, according to the SMMT. Though as indicated, overall production is at an historical low by comparison to pre-Covid years.

Nevertheless, BMW’s Mini plant in Oxford is provides a good example of that positive EV production trend. According to the carmaker, Germany is the biggest market for the Mini Electric and the Oxford plant supplied more than 10,000 to that market in 2021. Production of the Mini Electric production reached more than 37,000 units last year and after Germany and the UK the other major markets are France and the US. Transport to Europe is mainly carried out via truck and ship via the UK ports of Immingham and Cuxhaven.

BMW Group delivered its one millionth EV last month in the shape of a BMW iX xDrive40.

Sales of pure battery EVs are expected to account for 14% of overall vehicles sales in the European region in 2022, equal to 2.05m units, according to data from Ultima Media’s business intelligence unit, Automotive.

Read more about the global powertrain and battery production forecast.