A cleaner corridor for container movements through LA

Given the ongoing congestion crisis in container throughput at the US west coast container ports, one could be forgiven for thinking investment in more sustainable logistics was low on the agenda. Not so at the Port of Los Angeles, where the port authority is working hand in hand with vehicle and equipment makers, logistics providers and fuel companies to clean up container logistics once and for all. 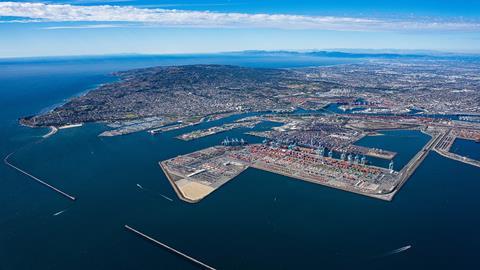 Port authorities are working alongside logistics providers to reduce their carbon footprint.

“We have got to do something in this decade to really turn things around and to reduce our carbon footprint,” he said and went on to highlight the port’s goals for carbon reduction to 2030, including the use of zero carbon fuel trucks by 2025 and the use of alternative fuels on other modes including ocean vessels, harbour craft and trains.

Tests for cleaner terminals
Cannon said that the most significant challenge the port was facing in realising its goals was developing the correct battery or fuel technology to move equipment used to process freight away from traditional combustion power.

“We have to find a way to work with the industry, the operators of the equipment and the manufacturers to get it out into the field and tested so we can understand the needs of operating it [and verify] it can in fact do what it is alleged it can do,” said Cannon.

Over the next two to three years, the port and its partners will be doing just that with between 200-300 different pieces of equipment.

One such project underway involves using hydrogen fuel cell trucks, being carried out with Toyota and Kenworth, along with logistics provider UPS and energy giant Shell. In June, the Shore-to-Store (S2S) project got underway with the deployment of five Class-8 fuel cell trucks and the opening of two inland hydrogen fuelling stations. The $82.5m project will run until May 2022 initially and includes the deployment of five more hydrogen-fueled heavy-duty trucks, two battery-electric yard tractors, and two battery-electric forklifts.

“The operators of the trucks say they are fantastic,” Cannon reported. “There is more range, and you don’t have to charge the trucks overnight; you can fill the hydrogen tank in 15 or 20 minutes.” 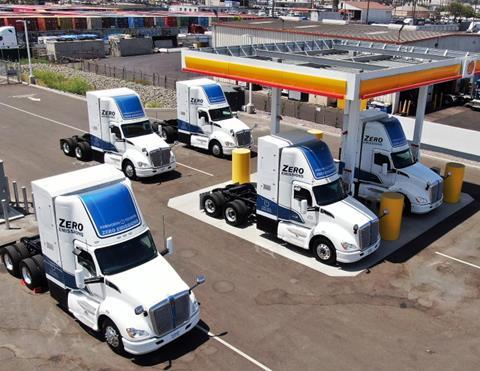 According to Cannon, the port of LA is also working with Daimler Truck and Volvo Group on testing battery electric trucks. The two vehicle makers announced a partnership last year to accelerate the use of hydrogen-based fuel cells for long-haul trucks. They started deploying the trucks in California in August this year.

In terms of terminal equipment, Cannon pointed to the testing of the world’s first battery electric top-handlers, which runs on a 1MW battery, capable of powering the heavy-lift machinery for two shifts. The top-handlers are being used at the Evergreen Container Terminal.

Cost is an issue that has to be addressed for the wider deployment of the equipment. The battery electric top-loader cost three times the amount of a similar combustion engine-powered piece of equipment and, like the hydrogen fuel cell trucks, that cost needs to come down if the projects are to translate into long term practical applications, said Cannon.

Green shipping corridor
Cannon also outlined how the port is working with the shipping lines and other ports to extend the sustainable flow of goods further afield, supported by digital tools. That included a joint initiative with the Asian ports feeding material into LA port to use similar, more sustainable handling equipment. However, details of that initiative have yet to be officially announced.

However, on the maritime side, he said the port was working with the shipping industry to deploy ships on low carbon fuels, including methanol and renewable natural gas. 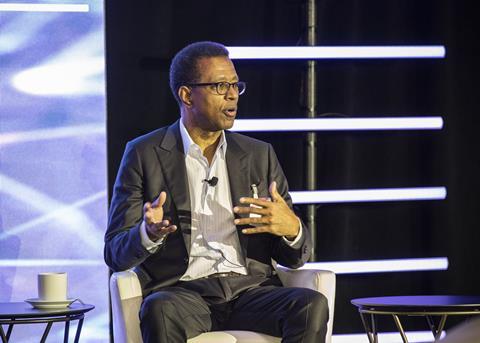 Chris Cannon, director of environmental management and chief sustainability officer at the  Port of Los Angeles, said that climate change was the biggest crisis facing the world after the Covid pandemic

Cannon explained that the port had also developed a web portal that facilitated early logging of cargo, able to provide information two weeks in advance of arrival. According to Cannon, that advance notice provided more planning time for more efficient handling when the cargo arrived, reducing emissions and the number of touches on the box.

“The idea is that from the gate when the cargo arrives to the gate when it leaves at the end, we have a lean pathway; want to see how these processes can work,” said Cannon.

Looking ahead, Cannon said that there would also be hesitancy in adopting new technology and operational strategies, and not just related to cost. However, he was in no doubt that more sustainable operations were critical and that incentives were needed to get everyone on board with the adoption of cleaner technology.

Strategic planning of national goods movements was also essential, said Cannon, supported by focused government resources and a focus on policy that would help facilitate the movement of goods more efficiently and in environmentally more beneficial ways.

“I would really like to see more of it where you identify goods movement corridors, facilities and modes that are important to move goods across the country… and support the transition to cleaner technologies,” he said. “That sort of sort of strategic planning needs to come from Washington.”