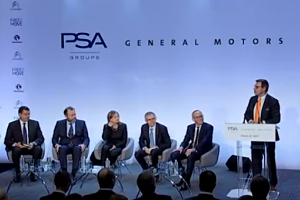 PSA Group and General Motors (GM) have come to an agreement over the sale of the latter's European business, specifically the Opel and Vauxhall brands, with the total price coming in at €2.2 billion ($2.33 billion), including a €900m deal for the financing division. The deal, which is expected to close by the fourth quarter of this year, is likely to have significant consequences for the companies' combined supply chains, including potential logistics savings.

PSA is targeting €1.7 billion of annual synergies from the combination within ten years, with targets of Opel returning to profitability for the first time this century by 2020. PSA expects much of this savings to come from synergies in manufacturing, purchasing, the supply chain and R&D.

As General Motors focuses its model line-up more towards higher margin, larger vehicles, its executives said that it no longer had the scale in Europe to support the investment necessary to maintain Opel/Vauxhall vehicles. PSA, meanwhile, with its large European focus, believes it is in a much better place to carry the brand forward with shared platforms.

“So of course we will support common platforms, common powertrains, co-development in engineering, and bring everything we have learned in the manufacturing and supply chain system that we think can also be implemented in Opel/Vauxhall,” said PSA CEO Carlos Tavares during a press conference.

The two companies first confirmed discussions over the proposed deal in mid-February. The GM European division had reported a loss for the US carmaker in every year since 1999 and the company will be taking a non-cash charge of $4-4.5 billion after it offloads the business.

The €1.3 billion main transaction encompasses all of Opel and Vauxhall’s automotive operations, including six assembly and five component-manufacturing facilities, one engineering centre in Rüsselsheim, Germany and approximately 40,000 employees. GM will retain its engineering centre in Torino, Italy.

In a separate deal, PSA has teamed up with French bank BNP Paribas to jointly acquire the GM Europe financing division for €900m.

Using 2016 revenues, the new business would add €17.7 billion to the €54 billion generated by PSA last year, which included €37 billion for the automotive division. The combined company would also be the second largest carmaker in Europe after Volkswagen, with a 16% market share.

Last year, PSA sold 3.15m vehicles globally, including 1.92m in Europe. Opel/Vauxhall sales reached 1.16m units in 2016, almost all of them in Europe.

The deal creates what Tavares has referred to a "European champion", with a high concentration across Europe. According to consultancy IHS Markit, the combined entity's dependency on Europe would rise to more than 70% of global sales from more than 60% currently, almost double that of the VW Group (38%) and even more than the Renault Group (54%).

Under the deal, GM will retain the company's European and UK pension plans, funded and unfunded, with the exception of the German Actives Plan and selected smaller plans. GM will pay PSA €3.0 billion for full settlement of the transferred pension obligations.

European divergence for GM, scale for PSA in supply chain and logisticsIn the press conference, GM president, Dan Ammann said the European business had been diverging rapidly from GM's other large regions – notably the US and China – over the past two years in terms of regulations and customer preference, a reference mainly to a preference in Europe for smaller, more fuel efficient, but also less profitable vehicles for GM. As a result, the European market has diverged with GM's overall market and vehicle model strategy; for example, only 20% of vehicles in the future portfolio would have been common with the rest of GM's global business, according to Ammann.

The Opel and Vauxhall businesses will continue to benefit from intellectual property licenses from GM until its vehicles progressively convert to PSA platforms.

The carmakers did not officially comment on what the transaction would mean for the sale of the Opel Ampera-e, a rebadged version of the Chevrolet Bolt that is GM's most advanced electric vehicle to date. It appears likely that PSA will sell the vehicle under licence from GM in Europe.

IHS Markit sees the first platform sharing programme for the combined PSA and Opel coming in the B segment (subcompact) vehicles and Peugeot's upcoming CMP platform. It predicts as many as 7m units being built on this platform eventually, with PSA vehicles accounting for 4m of these and Opel the rest.

Synergies within the C and D segment facilities are expected to yield synergies of about 60%.

Said Opel's Neumann: “Today’s announcement will bring Opel/Vauxhall much closer together. The industrial logic is obvious. We will benefit from size, joint development and production of cars, and two engineering teams joining forces.”

Such joint platform sharing would be likely to bring with it significant shared purchasing and part sourcing, increasing opportunities to combine supply chain and logistics flows. PSA and Opel/Vauxhall already share some co-production of vehicles that followed the original alliance agreement between GM and PSA in 2012. That agreement also led to GM Europe to contract Gefco, a former subsidiary of PSA, to manage its logistics operations as a 4PL. After Gefco signed a new exclusive global logistics contract with PSA for the next five years, it is set to remain the logistics provider across the group, and could be central to further combining the carmaker's supply chains across Europe.

Luc Nadal, Gefco's chief executive officer, told Automotive Logistics that where Gefco’s transport divisions have bid for business on outbound for both carmakers, it has already been able to offer each customer competitive rates on return truckloads or rail services. But there was also scope to go further, especially on inbound, where non-disclosure clauses have made it more difficult for parts to be combined in the same truck or warehouse. Nadal, for Gefco’s part, is waiting for the opportunity now to bring the carmaker's supply chains closer together.

“For Gefco, having PSA on one side and GM on the other, we know perfectly well the pros and cons of the two supply chains, and we think we are in a perfect place to offer the best from the two,” he says. “As per our contracts, we manage each OEM with a wall of privacy between them. As soon as they request help [in bringing logistics flows together], we will suggest ideas to combine the best of the two in logistics.”

Job fears as synergies soughtPSA, owner of the Peugeot, Citroën and DS brands, is targeting synergies in the areas of purchasing, manufacturing and research and development. Of the €1.7 billion in annual savings targeted by 2026, the company says it expects a “significant” portion of these to be delivered by 2020.

In addition the company expects Opel and Vauxhall to reach positive cash flow and an operating margin of 2% by 2020, growing to 6% by 2026.

She estimated to achieve it, there would “eventually have to be thousands of job cuts" despite PSA executives recently travelling Europe to pacify government and union fears over jobs ahead of finalising the proposed deal.

“That may include Vauxhall jobs, though there are strong arguments for keeping a UK base post-Brexit, or in German back office functions. But there's also substantial overlap in Spain and in central Europe (Poland, Slovakia, Czech Republic),” said Nicholls.

Plant and job guarantees are in place, although most of these expected to run out by 2020. PSA's Tavares said in the press conference that the synergy plans were not based on any job changes, but did point at a need for workers to achieve efficiency levels in manufacturing, supply chain and logistics, using those achieved at PSA in recent years as a benchmark.

“This suggests that while there are no plans to close plants, they may need to do so if metrics are not hit,” said IHS.

The consultancy sees the two Spanish sites of Zaragoza and Vigo as being in a good position in the combined group, given there seemingly full capacity levels in the B and C segment, with Trnava in Slovakia also considered safe.

However the analyst does see opportunities for consolidation among the other subcompact sites including PSA's Poissy (France) and Madrid plants, and Opel's Eisanach facility in Germany.

“Current forecasts show little visibility about a replacement for the Citroën C4 Cactus at Madrid, while it is thought that the Poissy site could become an electric vehicle (EV) facility building e-CMP architecture,” said Fletcher.

In terms of C and D segments, IHS said questions can be raised about the future of PSA's Rennes facility.

“Although it has an allocation of models until 2024, choices might have to be made in an attempt to gain synergies, with Rüsselsheim being a more preferable location if PSA intends to use Opel's Germanic roots as a marketing tool.”

The future of the Vauxhall plants in the UK seem less assured given the uncertainty surrounding the UK's pending departure from the European single market.

Said Tavares of the new facilities being acquired: We will give them a European benchmarket with which they can compare themselves across the company, be it manufacturing, purchasing, supply chain, R&D, finance, you name it.”

EIU's Nicholl added that if these synergy goals are successful then the combination of the two European businesses could result in some positive outcomes.

“If PSA manages to get enough synergies out of its expanded operation, by combining supply chains, reducing administrative costs, and possibly sharing production –which may include some plant closures – then the combination of French and German branding, styling and technology could be compelling.”