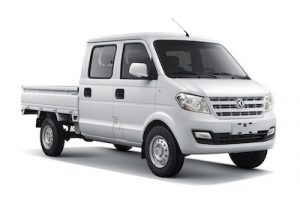 A trial shipment of commercial vehicles from Dongfeng Sokon (DSFK) arrived in Portbury, UK, last week all the way from Chengdu in China.

While the shipment was modest – including just seven containerised vehicles being delivered to the Commercial Vehicle Show in Birmingham – the mode of delivery was significant because the vehicles travelled predominantly by rail.

The cargo travelled via Poland to Duisburg in Germany and then onto Tilburg in the Netherlands. It is the first time a commercial vehicle consignment has moved between China and the UK predominantly by rail.

Only the final leg, from the port of Tilburg to London Gateway, was by short-sea. London Gateway is DP World’s port and logistics park, located just 25 miles from the UK capital.

DSFK is a joint venture between Chinese vehicle maker Dongfeng Motor and Chongqing Sokon Industry, which makes vehicles and engines.

The shipment was organised by UK-based OneTwoThree Logistics on behalf of Bassadone Group, which owns SsangYong Motor UK and is now the importer for DFSK products in the country. Bassadone has established a new subsidiary called Vehicle Import and Distribution to handle the imports.

OneTwoThree Logistics was involved in the organisation of the first freight train to arrive in the UK directly from China via the Channel Tunnel in January this year. That train was carrying consumer goods.

Tom Jacobson, management consultant at automotive supply chain consultancy alljoinedup, who organised the shipment, said the rail service was provided by RTSB, a specialist in rail and intermodal services between China, the CIS countries and Europe. GVT International and A2B Logistics were involved in the crossing from Tilburg to the UK.

According to Jacobson, the train left Chengdu on March 22nd and arrived in Portbury (near Bristol) on April 13th, a journey of 22 days – around half the time it would have taken by ocean vessel – despite a day’s delay in customs at London Gateway.

“This is a reduction of around 23 days by ship, including the three days it would take to get from DSFK’s production plant in Chongqing to Shanghai port,” said Jacobson.

While the cost of the service does not currently make it an economic alternative to ro-ro or containerised vehicle shipment, it remains a serious consideration for the future, according to Jacobson.

“I think for higher value units or where there is an imperative to have sold order units arrive more quickly than the traditional service allows, it will be used,” he said.