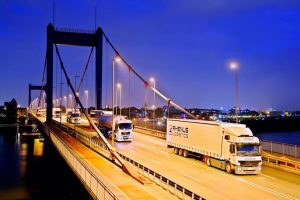 Russia's localisation strategy for foreign carmakers who wanted to take advantage of building their cars in a once lucrative, but more recently tanking, Russian market is bearing fruit for their logistics providers this spring, despite a long economic winter, if comments made this week at the Transport Logistics trade fair in Munich, Germany, are anything to go by.

German logistics provider Rhenus Group maintains it has “emerged even stronger from the economic crisis in Russia” on the back of the demand for groupage freight services that are targeting new emerging developments in the country's inland regions. This month (May), the company announced it was providing seven new groupage freight services to Russian destinations further inland because of a “huge level of demand from customers”, including those in the automotive industry.

That demand has been fed by the growth in development of special economic zones (SEZs) in a country that has at least a few surprises for anyone doubting its resilience. One of them is that the World Bank's 'Doing Business Index' has moved Russia up more than 80 places in the last five years, during its economic crisis, to number 40, according to Matthias Schepp, chairman of the management board of the German-Russian Chamber of Commerce. Now is the best time to do business in Russia, according to Schepp.

Promotion clearly, but for the seasoned logistics provider that did not abandon the Russian car market during the crisis the advantages become clear, once you look a bit deeper at the reasons for it and consider the uplift, according to Rhenus.

Olaf Metzger, managing director of Rhenus Freight Logistics Russia, pointed out that a weak rouble had hit the import of goods into Russia from regions such as Europe by as much as 50%. The purchase of car and truck parts was part of that decline.

Economic stagnation in Russia, thanks to such things as an overdependence on oil trading and sanctions imposed on the country by Western powers, hit consumers' ability to buy cars.

“During the crisis we saw the situation where car and truck production went down,” said Metzger. “Correspondingly, we had to transport and clear [through customs] fewer components for production. If people are not able to buy a new car, they have to take care of the existing one.”

And that is where the opportunity was to be found, explained Metzger at Transport Logistics this week. He said that Rhenus concentrated on the spare parts business, of which it already controlled a large part.

“We decided to focus on it and attract new clients, and we increased volumes through the crisis,” he said.

However, that has not been at the cost of inbound parts shipments, a direct consequence of the Russian government's original localisation policy for foreign carmakers, including Ford, Nissan and VW, which attracted their suppliers to set up facilities near the carmaking plants. Metzger said that the number of foreign tier one suppliers now securely based in the country, such as Benteler and Schaeffler, was good news for logistics providers as the automotive market spluttered back to life.

From 2013, car sales dropped because of a deteriorating economic environment and in 2015, they decreased by 37%, according to figures from analyst PWC.

Metzger took a stoic view of this decline, however. “For Rhenus, being 12 years in business in Russia, it was the third crisis and probably not the last one,” he said.

The company now expects things to get better because while sales stayed weak last year, Alexey Volodin, head of the automotive industry and railroad transport department at Russia’s Ministry of Industry and Trade, said recently that the government expects a 7% rise in sales of new cars during 2017, with domestic demand rising to up to 3m units by 2025. Russian car sales in the first quarter of 2017 were up 1% over Q1 2016, meanwhile.

“This is the huge potential for us and we concentrate our services on that and continue to do it better,” said Metzger. “This is the future for us.”

Importantly, that future is not just in the revivified traditional regions of vehicle production that Rhenus has had on its map for the last 12 years, such as Tartarstan, but in the regions to which it now provides groupage services, which according to Sergej Maas, operations director of Rhenus Freight Logistics Russia, also include Bashkortostan, Udmurti, Chuvashia, the Urals and Siberia, as well as the Far East.

Groupage services are fed on a weekly basis by two hubs in Europe – in Lithuania and Germany – which handle pre carriage from all over Europe, the US and Asia using the Rhenus network.

The confidence in Russia, at least by the 5,300 German companies doing business there, was backed up by figures from Schepp, who said that 66% of German business in Russia expected GDP growth for the country and their own revenues this year. And 47% of them were increasing their workforce this year to prepare for it.

That confidence is something Rhenus is looking to build on. “Reliable and transparent groupage freight and part load services will become more important again in times when economic relations become more normal,” said Bernd Stichel, managing director of Rhenus Revival, the group's division serving markets in the Commonwealth of Independent States (CIS).

The recovery of the Russian automotive market and what it means for logistics providers will be under discussion at this year's Automotive Logistics Russia summit being held on July 5th in Moscow.