Russia summit: Automotive market recovery will be slower than expected 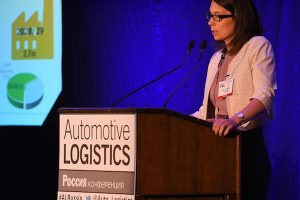 Russian carmakers are hoping to sell 1.6m cars and light commercial vehicles this year compared to 1.4m in 2016, according to figures from business analyst IHS Markit presented at today’s Automotive Logistics Russia summit. After four straight years of crashing production and sales figures in Russia the recovery will be slow. Bad credit means Russia is now unlikely to see sales reach 3m vehicles a year (as previously forecast) before the end of the next decade, delegates at the summit in Moscow were told.

Logistics providers have weathered the downturn by looking to other sectors: according to a poll taken at the event, more than 70% of them have already done so, in fact. A third of the LSPs present suggested they saw other sectors as the main opportunity for growth going forward.

Tatiana Hristova (pictured), manager of CEE and MEA European LVS Forecast at IHS Markit, said that the gradual recovery in the Russian automotive market would in part depend on convincing those investors that had not so far left the country to stay. That was complicated by the ongoing economic sanctions imposed by the US and European Union, she said, which look like they are going to stay in place longer than expected. While not worsening the Russian economy, those sanctions are impeding financial liquidity and Russia is looking further afield for investors from China, India and Middle East.

Foreign markets also offer hope for supporting production in Russia through new vehicle export trade. Hristova pointed to the Middle East again, along with Africa and South America, as those markets with the greatest potential. She said that historical contacts as well as similar consumer preferences made Egypt, Algeria and Tunisia high-interest markets, as well as countries in the Sub-Saharan region.

“In South America, we recommend paying special attention not to the biggest markets in the region, but more to Chile, Peru and Ecuador,” added Hristova. North America, Australia and South Asia, by contrast, were not such good export markets, according to IHS data, because of their low regard for Russian car brands and sufficient local capacity from other brands.

Compensation for high-tech exports
Another incentive for companies investing in production in Russia is the compensation now available for those moving high-tech automotive components.

Ksenia Sizova, an associate at global law firm DLA Piper, highlighted at the summit that from this year, those making high-tech parts could get up to 80% of their transport costs reimbursed via the Russian Export Center, part of Vnesheconombank, which has been mandated by the Russian government to give financial (and non-financial) support to exporters. With a finite budget, however, that support was very much a ‘first come, first served’ basis, said Sizova.

Nevertheless, the export of high-tech goods is important for the Russian economy: between 2006 and 2016, it was worth $9 billion. There is a trend to increase export volumes, said Sizova, and subsidies to support that increase would be trebled in 2020.

While finite, those subsidies will amount to 12 billion roubles ($200 billion) over the next two years. However, exports of non-commodity-related goods are substantially underdeveloped in Russia, said Hristova, and require high investment in logistics, as well as local sales and service.