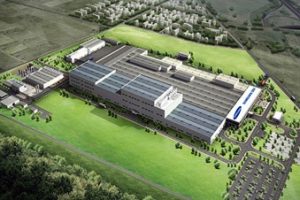 Battery maker Samsung SDI is building a 400 billion won ($365m) plant in Hungary with an annual capacity of 50,000 batteries for the electric vehicle market in Europe.

The firm already supplies batteries to customers including BMW, with which it worked on the development of its battery cell technology, while in June, it was reported to be in talks about starting to supply batteries for Tesla’s Model 3.

The company said it was aiming to start production at the plant in Goed, 25km north of the capital Budapest, in the second half of 2018.

Building the plant there, it said, would reduce logistics costs while improving access and response to demand from carmakers in central and eastern Europe.

The company currently has battery plants in Ulsan, Korea and Xian, China.

The Korean battery maker believes it has a competitive advantage in the sector because of its integrated production system, which ranges from battery cells to packs. Its operation was boosted by last year’s buyout of Magna Steyr’s battery pack business, now renamed as SDI Battery Systems, Austria (SDIBS).

“By launching construction for the plant in Hungary, we now can set up the global triangular production structure for electric vehicle batteries,” said executive vice-president Jeong SehWoong, who is also head of automotive and the ESS business division (ESS stands for energy storage system). “We can especially provide higher quality services to customers in Europe by generating synergy with SDIBS.”

The company added that it would be able to reduce the construction time and costs associated with the new site as it was being built on an existing facility it opened in 2001, originally to make cathode ray tubes (CRTs).