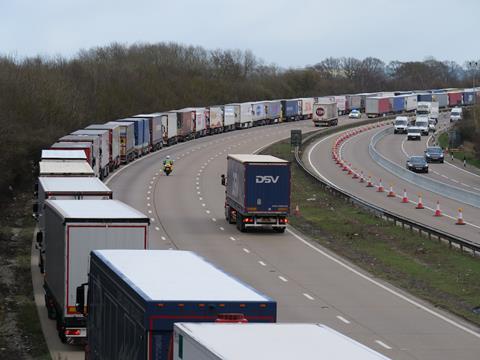 Highways England has activated its plan to avoid freight traffic congestion on the M20 in the event of disruption to cross-Channel services caused by the UK’s withdrawal from the EU.

Highways England is the government-owned company charged with operating, maintaining and improving England’s motorways and major A roads.

Operation Brock, which came into effect on Monday (October 28), will be executed according to four phases (see box) and use holding areas along the route to the port of Dover or Eurotunnel (which runs under the English Channel) to keep the M20 open in both directions between junctions 8 and 9. The route is used by 90% of freight traffic moving between the UK and mainland Europe.

The strategy is an alternative to the older Operation Stack, the existing procedure implemented whenever there was an urgent need to inhibit the flow of traffic to the Channel Tunnel and the port of Dover, but according to Highways England it offers significant improvements.

The holding areas are in Kent and located at: the A20 to Dover, the M20, Manston Airfield and the M26. Hauliers travelling through the area are obliged to follow instructions and diversion signs, and adhere to speed restrictions. Drivers are also expected to carry the correct documentation.

All cars, coaches and goods vehicles under 7.5 tonnes heading to the coast are instructed by Highways England to follow signs on the M20 through the two-lane contraflow irrespective of their destination (local or heading towards the ports). All HGVs over 7.5 tonnes leaving the UK are instructed to follow signs on the M20 approaching junction 8 and 9 and get in the correct lane of the coast-bound carriageway per their port-destination.

The deadline for the UK’s withdrawal from the EU is set for October 31 though EU leaders have agreed that the withdrawal date can be extended to January 31, 2020 because the UK Parliament has failed to agree on a Brexit deal. Prime minister Boris Johnson said the UK would leave the EU on October 31 with or without a deal, but he is required to accept the EU’s extension offer because of the EU Withdrawal (No.2) Act, known as the ‘Benn Act’, which forces the government to act to stop a no-deal Brexit.

Once approval is given by Parliament the UK has the opportunity to leave the EU before the January 31 deadline.

Phase 1 – In the event of excessive disruption to services across the English Channel, improved holding capacity at port of Dover and Eurotunnel, as well as the activation of DoverTAP (queue management of port destined HGVs on the A20 approach to Port of Dover) will be used.

Phase 2 – If phase 1 capacity is reached, queuing of Europe bound HGVs over 7.5 tonnes on the coast-bound section of the M20 between junction 8 and 9 will begin. All other vehicles will be signed to use the contraflow.

Phase 3 – If phase 2 becomes full, lorries heading for port of Dover will be directed to Manston Airfield, while the M20 will be used to hold Eurotunnel destined HGVs only. Traffic lights on the A256 after Manston Airfield will help to manage traffic arriving at the port of Dover.

Phase 4 – If the M20 holding area becomes full, the M26 will be used to hold additional lorries wishing to leave the UK via Eurotunnel. When held on the M26, lorries will be held until space on the M20 junction 8-9 becomes available.

Brexit’s impact on the automotive industry will be under discussion at the forthcoming Automotive Logistics UK summit, which takes place December 4 at Castle Bromwich, the home of Jaguar.