Volkswagen seals a series of deals with Gaz Group in Russia 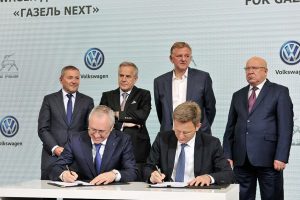 Volkswagen and Russia’s Gaz Group have signed a series of deals covering an engine supply agreement, a possible strategic partnership with VW Truck & Bus and an extension of the contract to manufacture Skoda models in Russia.

The 2.0 TDI diesel units will be shipped from the VW plant at Salzgitter, Germany and installed in the GAZelle NEXT family, which includes drop-side trucks, full-metal vans and minibuses.

The Salzgitter engine plant produces up to 7,000 gasoline and diesel engines per day. The plant is currently building up competence in the development and production of battery cells and modules, and preparing for the production of electric powertrain components.

Meanwhile, the agreement between the two carmakers to produce Skoda cars at the Gorky plant in Nizhny Novgorod has been extended until 2025. The new contract defines the model versions to be produced and sets out the plans to adapt Gaz production capacities for the launch of new VW Group models in Russia.

The cooperation between Volkswagen Group Rus and GAZ Group started in 2011 with the signing of an agreement for the contract assembly of Volkswagen and Skoda cars at the plant. So far 200,000 cars have been produced, including the Volkswagen Jetta, Skoda Yeti and Octavia models.

The maximum annual production capacity at the Gorky plant is around 132,000 vehicles.

In a separate deal, VW Truck & Bus signed a letter of intent with Gaz to identify long-term strategic partnership opportunities in the delivery and joint assembly of components, as well as joint product design.

In the first quarter of 2017, VW Truck & Bus sold 1,390 trucks in the Russian market doubling the previous year's figure.

“Expansion of cooperation between the Gaz Group and Volkswagen Truck & Bus will make it possible to explore our capabilities for the development in commercial transport segments across the globe,” said Manfred Eibeck, chief executive of Russian Machines, which owns the Gaz Group.