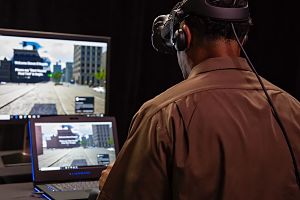 Global courier company UPS has revealed it will begin using virtual reality (VR) to help train vehicle drivers in hazard awareness from September at its nine Integrad training facilities in the US, replacing the touchscreen devices currently used.

The VR technology will be used to help students identify potential road hazards such as pedestrians, parked cars and oncoming traffic.

VR training will initially be used to train UPS’s courier drivers but the company is also exploring the use of VR and augmented reality for training tractor-trailer drivers and staff performing other duties throughout its operation.

“Virtual reality offers a big technological leap in the realm of driver safety training,” commented Juan Perez, UPS chief information and engineering officer. “VR creates a hyper-realistic streetscape that will dazzle even the youngest of our drivers whose previous exposure to the technology was through video games.”

UPS currently operates eight Integrad facilities in the US with another set to open later this year. It also has two in Europe. The sites teach the fundamentals of driving delivery vehicles and delivering packages and host replica outdoor cities with real streets and sidewalks, as well as simulated delivery and pickup sites. Drivers attend Integrad courses before beginning more intensive on-road training.

In July, the Volkswagen Group announced that it had bundled all of its virtual reality (VR) applications for production and logistics into a ‘Digital Reality Hub’.