Strong growth in vehicle numbers moving into and out of Europe over the past few years has created capacity constraints and bottlenecks at the continent’s ports. While the scope to significantly expand physical space might be limited, executives from carmakers and logistics providers have suggested better visibility and sharing of vehicle inventory across the supply chain could help alleviate the problem. 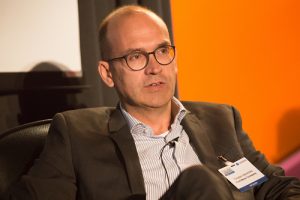 Torsten Heinrichs, manager for vehicle logistics for the European continent at Ford

According to the recent Finished Vehicle Logistics survey, European ports handled well over 21m new light vehicles in 2016 – the highest number since the global economic downturn.

Speaking at the recent Automotive Logistics Europe conference, Torsten Heinrichs, manager of finished vehicle logistics for Ford in Europe (excluding the UK), said the past three years of sales growth in the region, coupled with expectations of further growth ahead, meant there was a need for smarter, more flexible networks to be put in place.

“Not only are volumes growing overall, but also long-distance sourcing [of vehicles] is growing significantly,” said Heinrichs, referring to a growth in Ford imports to Europe from plants in South Africa, India and North America.

“That is putting significant strain on our port infrastructure. It is one of our bottlenecks,” he added, before going on to call for more collaboration between all players in the network to properly alleviate the problem.

He said on an individual basis, each segment of the supply chain operated very well, including shipping lines, port operators, and truck and rail operators. However, from a single customer point of view, it did not add up to a flexible supply chain from door to door, with a lot of time being lost at the handover points between these various modes.[related_topics align="right" border="yes"]

Heinrichs said the situation reminded him of a problem in a previous role in material logistics after he launched a train service from Cologne to the Ford’s plant in Kocaeli, Turkey, where it builds the Transit van.

Despite being a well-functioning service, he said the average speed of the train door-to-door was slower than the average speed of a good marathon runner. “It was a very reliable train service, but it was very slow because there were many borders we had to cross, where we lost a lot of time,” said Heinrichs.

He invited finished vehicle logistics players to use the major transformational changes happening within the automotive sector as motivation to improve their own processes and become more efficient. [mpu_ad]

“I think compared to what is happening in [the automotive] industry, development in vehicle logistics is relatively slow,” he commented.

He also called for more innovation across the whole supply chain and across different transport modes.

“We need to do more research together, we need to understand better, we need to experiment and solve – all the way from the OEM to the customer,” he stressed.

“We are dealing with that (congestion) with network planning efforts,” he commented. “We have been doing that to eliminate bottlenecks and will continue to do that, but I think to achieve an overall improvement in the supply chain, we need to have a deeper look together.”

Falling behind at seaIf volume growth predictions by some analysts transpire over the next five years, the situation at the ports could get even more severe, warned Hans-Bert Bong, director of Dr Bong Business Consulting and a former head of Ford’s vehicle and inbound logistics.

Bong said that by 2023, additional vehicles moving in and out of the continent’s ports could be around the number of cars currently going through Zeebrugge in Belgium, the continent’s highest volume ro-ro handler in 2016 with 2.77m units. 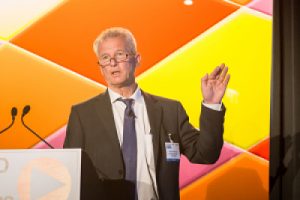 Bjorn Svenningsen, head of sales and marketing at short-sea shipping operator UECC, pointed to a lack of capacity in the shipping industry, meanwhile. According to data from Clarkson Platou, growth in shipping capacity over the next few years will trail forecast growth in the overall car market.

Svenningsen also highlighted capacity constraints as well as a lack of labour at some ports, pointing out that these were causing long dwell times at certain locations. At one port, he said, UECC experienced 19 days of idle time between March and May of this year alone, due to terminal congestion and lack of labour.

He went on to call for more collaboration and systems integration between LSPs and OEMs. Digital data and communication platforms may play a significant role in helping through the capacity crunch, suggested Svenningsen.

“We are very conservative, actually old-fashioned, in the outbound logistics field,” said Svenningsen. “[However] a lot of focus and effort has been put into the inbound side, because the plant can never stop.”

UECC has previously launched a digital platform to allow its OEM customers to access key information.

Marc Adriansens, managing director at terminal operator ICO, also highlighted digitalisation as a solution to the overcapacity and bottlenecks at ports.

He said at port level, a data platform which provided information from all modes, including train, truck and ship information alongside positioning information and weather forecasts, could go a long way to getting accurate ETAs for deliveries. This would in turn allow for just-in-time allocation of resources such as tug boats and parking spaces.

He also highlighted the logical solution of extending terminal operating hours, by providing ‘e-gate’ access. This would potentially allow truck drivers to check in and load vehicles at all hours of the day. 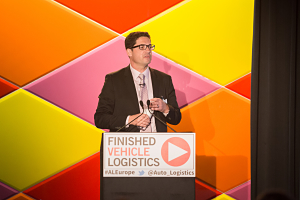 Thinking back in the box?Christoph Seitz, managing member at vehicle shipping company and freight forwarder CFR Rinkens, highlighted a non-software way of dealing with capacity constraints at port: sea containers for shipping cars. He acknowledged, however, that this would never completely replace ro-ro.

He cited figures from Drewry Marine Research estimating that of some 35m shipping containers moving around the world, 25% were empty. While overcapacity in global shipping clearly contributes to this problem, Seitz said the statistic also reflected an inability by the industry as a whole to properly use empty backhaul space, which better data could help solve.

CFR Rinkens has been using its collapsible racking system to ship cars in containers for over six years and counts Tesla in the US as its key OEM client, shipping cars built by it in California to Europe and Asia.

Videos of the main sessions of the conference can be viewed again here.