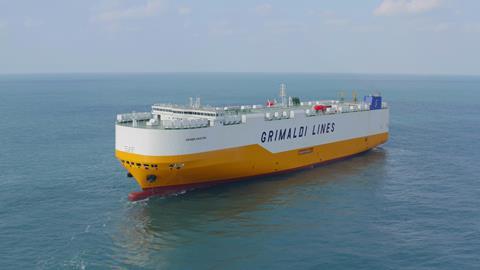 Shipping line Grimaldi has taken delivery of a pure car and truck carrier (PCTC), the Grande Houston, from Yangfan shipyard in Zhoushan, China.

She will be deployed on the Italian group’s weekly Mediterranean-North America service from March. Her sisterships Grande Torino and Grande Mirafiori already ply the route.

“Delivery of the Grande Houston represents a further step forward in the direction of an ever younger, efficient and eco-sustainable Grimaldi fleet,” said managing director Emanuele Grimaldi.

The third of seven ships Grimaldi has commissioned from Yangfan, the new vessel is 199.90 metres long, 36.45 metres wide and has gross tonnage of 65,255 t, making her among the largest PCTCs in the world. She can transport around 7,600 car equivalent units (CEU), or alternatively 5,400 linear metres of rolling stock and 2,737 CEU.

Grimaldi, based in Naples describes the Grande Houston as an extremely flexible ship, with four hoistable decks and able to take any type of rolling freight up to 5.3 metres high. She is fitted with a quarter stern ramp capable of taking freight up to 150 tonnes as well as a side ramp.

“Thanks to the configuration of the various decks and to the system of internal ramps, the risk of damage during the loading or unloading of rolling units is minimised,” the shipping line said.