Higher tariffs on containerised vehicle shipments from China is also leading to a switch in mode to ocean, adding to the demand for more services. That is expected to create an imbalance in supply and demand in the ro-ro transport sector in the short and medium-term.

“Cargo volumes in most directions have increased significantly compared to 2020,” said Dmitry Vostrikov, managing director of Norwegian operator Wallenius Wilhelmsen in Russia. “The deferred demand after the last year’s slump and, in general, the growth in the production of various types of products, equipment and cars, is also playing its part [in the resurgence],” he said. 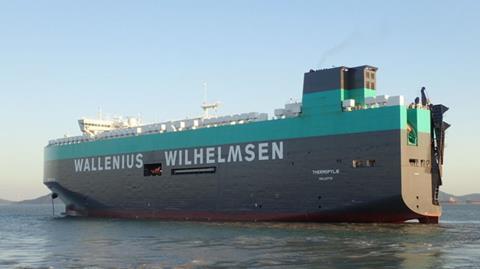 While overall sales on the Russian market remain close to the level of early 2020, several carmakers have seen signs of increased demand over the past few months. The Russian Association of European Businesses (AEB) anticipates a noticeable market recovery throughout 2021.

Ro-ro carriers are responding by returning ships that were taken out of service in 2020 back into operation. As reported earlier, Wallenius Wilhelmsen has reactivated all 15 vessels taken out of service in the early part of 2020. Vostrikov said that in some directions, especially from Asia to Europe, there was a significant shortage of carrying capacity, adding that the shortage may last until July.

With regard to finished vehicle shipments from China, Vostrikov highlighted the switch from rail to ocean.

“There is a transition to ro-ro for car delivery from China, where traditionally container delivery by rail in containers was used,” he said. “This trend is likely to continue in the coming months. The change in the supply scheme is associated with an increase in container and railway tariffs, as well as an increase in volumes, which ro-ro carriers can easily cope with, offering a sustainable service to St Petersburg and Novorossiysk [ports],” Vostrikov said.

There are no significant changes in exports to non-CIS countries. The volumes are comparable to those of early 2020, although some foreign automakers are mulling new plans for exporting finished vehicles from the Russian factories.

However, the coming months are likely to bring a further increase in fuel costs because of rising global oil prices, which would take a toll on transport costs, Vostrikov said.