NYK has commissioned the building of 12 pure car and truck carriers (PCTCs) fuelled by liquified natural gas (LNG) from two shipyards in Japan. 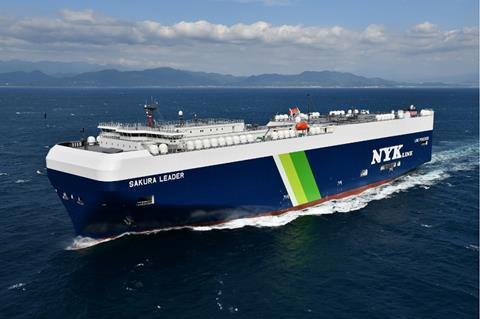 The Japanese shipping and logistics company wants reduce CO2 emissions per ton-kilometre of transport by 50% by 2050. It said the use of LNG fuel, in addition to hull modification to improve fuel economy, will contribute to a reduction of CO2 emissions by approximately 40% compared to ships using conventional heavy fuel oil.

NYK has signed agreements with the Shin Kurushima and Nihon shipyards, which will build six vessels each for successive delivery between 2025 and 2028. Each vessel will have a total vehicle unit capacity of between 6,800-7,000. Shin Kurushima Dockyard built NYK’s first LNG-fuelled PCTC, Sakura Leader (pictured), which was delivered in October last year. It was the first LNG car carrying vessel to be built in Japan.

The adoption of LNG is part of NYK’s Sail Green project, which aims to reduce CO2 emissions from the finished vehicle supply chain, including ocean and inland transport, and from its vehicle handling terminals at ports around the world. The company said LNG was a bridge solution toward future zero emission ships and that it was further advancing vessels that used marine fuels with lower environmental impact, such as hydrogen and ammonia from 2030.

Earlier this year, in February, NYK ordered four LNG-fuelled PCTCs from China Merchants Jinling Shipyard in China. Those vessels will be delivered between 2022 and 2023.

Other ocean-going finished vehicle forwarders are also building LNG vessels, with UECC, Siem Car Carriers and K-Line all having made recent announcements.

The transition to more sustainable finished vehicle logistics will be under discussion at this week’s Finished Vehicle Logistics North America Live conference, which takes place between June 22-23