Bearing manufacturer SKF is trialling an autonomous electric truck to transport parts between its factory and its warehouse in Gothenburg, Sweden. The vehicle has been developed with Einride, the Swedish transport provider that specialises in electric and autonomous vehicles (AVs), and is based on its Pod concept. 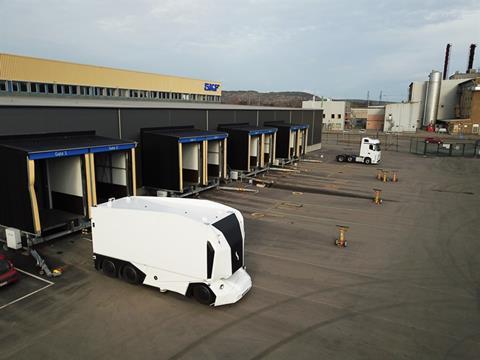 SKF and Einride are also working on developing a way for the loading and unloading of the trucks to be automated.

Per Olaf Arnäs, Strategic Logistics Expert for Einride will speak at the Automotive Logistics & Supply Chain Europe Live, which will be held virtually on April 20 and 21.

“With the partnership with SKF, we now have customers in all our priority customer segments: trade, consumer goods and industrial goods, which we are very proud of. Together with them, we will learn and grow quickly,” said Jonas Hernlund, commercial manager at Einride.

The Pod has a 10-ton carrying capacity and has four levels of autonomy (which are different from the SAE’s industry-accepted five levels of autonomy). In the first stage, the AV can operate in closed facilities with clearly defined routes. In the second stage, it adds short distances over public roads. This is the type used by SKF.

Companies using the Pods have to count on monthly operational costs of approximately $18,000 for the first stage and $19,000 for the second stage. Pods with stage three autonomy will cost $20,000 per month to operate, rising to $22,500 for stage four. These fees include Einride operators remotely overseeing their movements.